A Government of India Tourist Office advertisement from the 1960s shows that besides the Taj Mahal, it was also the 'sport' of shikar (hunting) which India used to attract the world to its shores.

New Delhi: India has come a long way from inviting the world to come and kill its tigers for pleasure to putting Bollywood superstar Salman Khan behind bars for killing blackbucks.

After a lot of effort, the tiger population in India is finally expected to cross the 3,000 mark in the 2018 tiger census. The numbers of the striped cat had dwindled alarmingly in the country before a concerted conservation effort has finally started to boost numbers.

The low tiger population in India isn't only because of poachers and environmental factors. When the government of a country actually invited tourists from all over the world to come here and kill our tigers for fun — there was little hope for survival of the magnificent beast.

This Government of India Tourist Office advertisement from the 1960s shows that besides the Taj Mahal, it was also the 'sport' of shikar (hunting) which India used to attract the world to its shores. 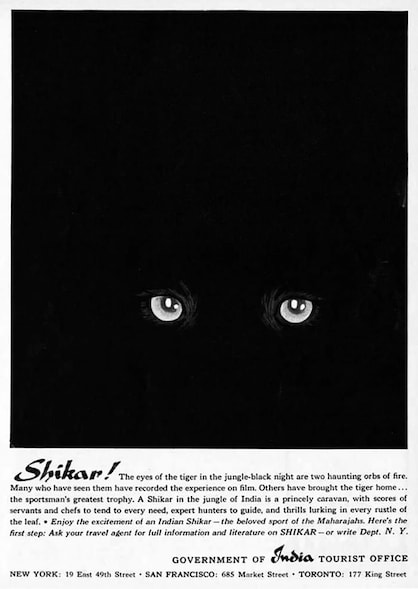 "Shikar! The eyes of the tiger in the jungle-black night are two haunting orbs of fire. Many who have seen them have recorded the experience on film. Others have brought the tiger home… the sportsman's greatest trophy," the ad allured.

The advertisement then goes on to glorify 'shikar': "A Shikar in the jungle of India is a princely caravan, with scores of servants and chefs to tend to every need, expert hunters to guide, and thrills lurking in every rustle of the leaf. Enjoy the excitement of an Indian Shikar – the beloved sport of the Maharajahs."

It is only in the 1970s that tiger conservation was taken seriously by the Government of India (Project Tiger was launched in 1973), but much of the damage had already been done.