A priest wearing personal protective equipment (PPE) walks in front of the body of a person who died of the coronavirus disease (COVID-19), as he collects woods to make a funeral pyre at a crematorium in New Delhi, India, July 3, 2020. REUTERS/Anushree Fadnavis.

The recovery rate among COVID-19 patients has risen to 64.51 per cent. The total number of confirmed cases also includes foreigners. This is the seventh consecutive day that COVID-19 cases have increased by more than 45,000.

India's COVID-19 tally went past 15 lakh on Wednesday, two days after it crossed the 14-lakh mark, with 48,513 fresh cases recorded in a day while the recoveries surged to 9,88,029, according to the Union Health Ministry data.

The total coronavirus cases climbed to 15,31,669, while the country's death toll due to the disease rose to 34,193 with 768 deaths being reported in a 24-hour span, the data updated at 8 am showed. There are 5,09,447 active cases of coronavirus infection in the country presently.

The recovery rate among COVID-19 patients has risen to 64.51 per cent. The total number of confirmed cases also includes foreigners. This is the seventh consecutive day that COVID-19 cases have increased by more than 45,000. 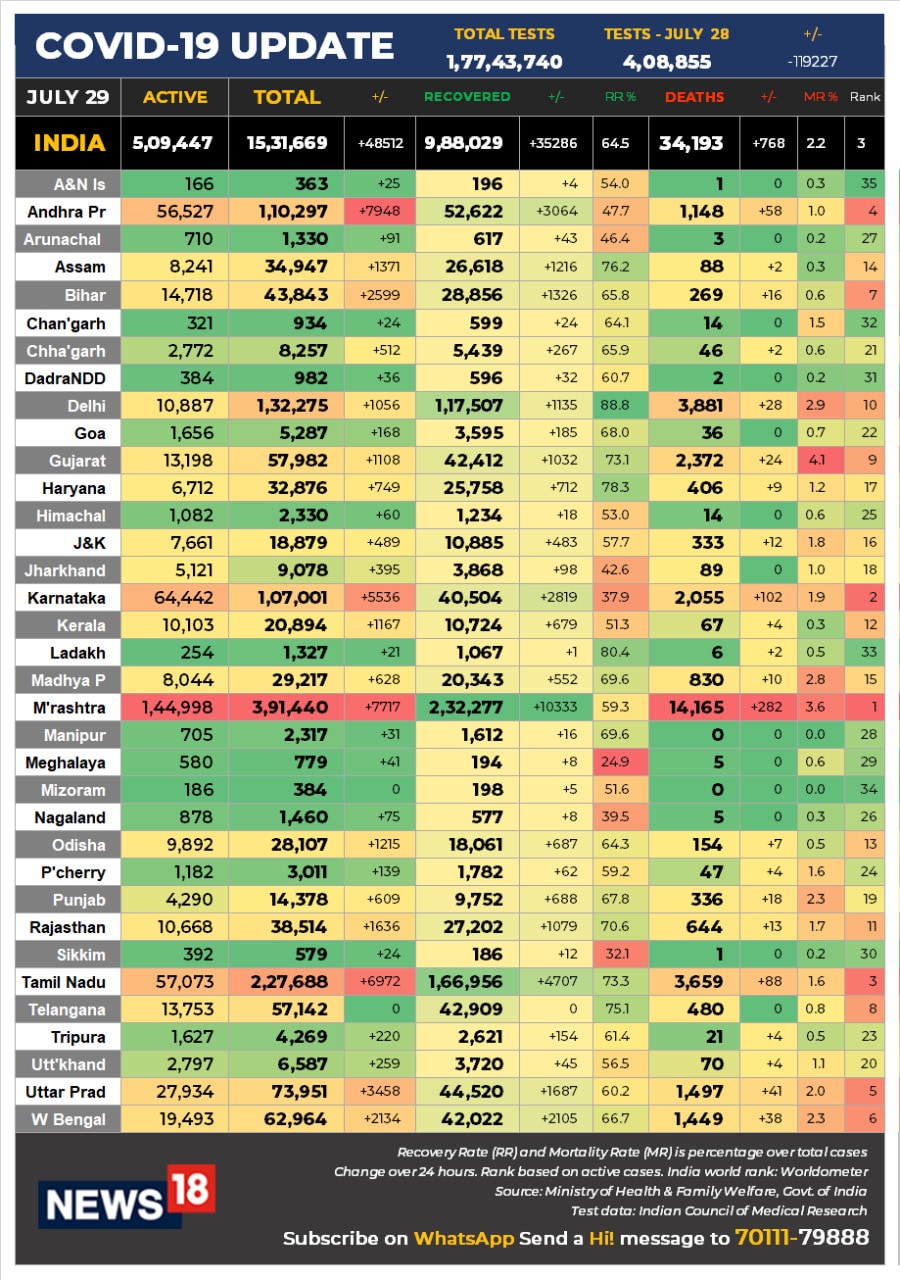 Twelve fatalities have been reported from Jammu and Kashmir, 10 from Madhya Pradesh, nine from Haryana, seven from Odisha, four each from Kerala, Puducherry, Tripura and Uttarakhand, two each from Assam, Chhattisgarh, and Ladakh.

The figures of Telangana, in terms of cases and deaths have been not updated on the website as the data was "awaited" from the state government, the ministry mentioned.

Puducherry has registered 47 deaths, Chhattisgarh 46, Goa 36, Tripura 21, Chandigarh and Himachal Pradesh 14 each, Ladakh six, Meghalaya and Nagaland five each, Arunachal Pradesh three, Dadra and Nagar Haveli and Daman and Diu two and Andaman and Nicobar Islands and Sikkim one each.

The health ministry stressed that more than 70 per cent of the deaths occurred due to comorbidities. "Our figures are being reconciled with the Indian Council of Medical Research," the ministry said, adding that state-wise distribution of figures is subject to further verification and reconciliation.
Tags