Religious leaders have been telling members of the community that they must recheck the way their names and other details are mentioned in the documents, to not leave room for any 'problems in the future'.

Demonstrators display placards during a protest against the Citizenship Amendment Bill and NRC. (Photo: REUTERS/Amit Dave)

Bengaluru: Mosques in parts of southern India are making announcements during Friday prayers to members of the Muslim community that they should recheck their documents and identity records to ensure they are error-free.

While religious leaders say this is not a reaction to the counter-infiltration National Register of Citizens (NRC), which home minister Amit Shah has said will be implemented across the country, they do acknowledge that it is a “precautionary measure”.

The move comes after heads of mosques from four southern states held consultations a few weeks back. They are now telling members of the community that they must reexamine and cross-examine the way their names and other details are mentioned on their identity documents, to not leave room for any “problems in the future”.

“We don’t have any problem with NRC or the (Citizenship Amendment) bill that is coming, because we are citizens,” said Mohd Maqsood Imran, imam (who leads prayers in a mosque) of the Jamia Masjid in Bengaluru, the ‘governing mosque’ for the state of Karnataka.

“But for precautions we are telling the people that they must check their documents and apply immediately for corrections if there are any mistakes. Particularly in south Karnataka, many do not have similarities in their data recorded on different documents like the Aadhaar cards, PAN cards and voter identity cards.” 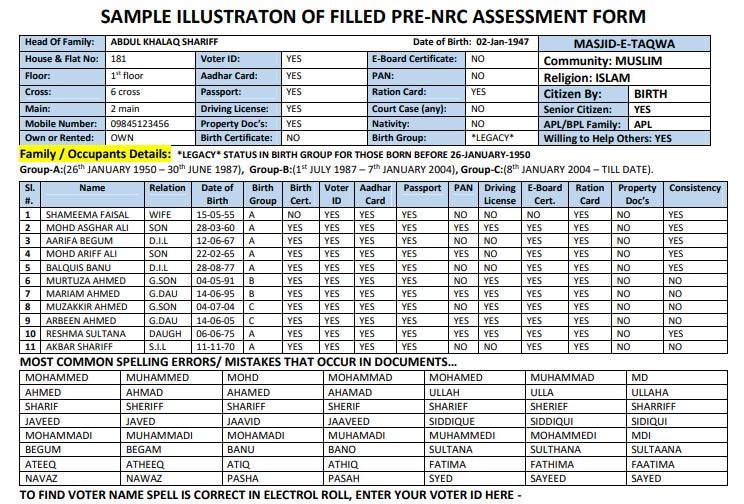 A sample pre-filled NRC assessment form has been distributed among Muslims to get their documents in order.

Indian Muslims have no reason to fear the Citizenship (Amendment) Bill, the home minister repeatedly told the Lok Sabha on Monday while replying to a debate on the controversial legislation. “The bill has nothing to do with Indian Muslims. The bill only intends to provide protection to the persecuted minorities in Pakistan, Afghanistan and Bangladesh,” Shah assured.

The CAB, which has been cleared by the Lok Sabha and will be tabled in the Rajya Sabha on Wednesday, seeks to amend the Citizenship Act, 1955, to grant Indian citizenship to Hindus, Jains, Christians, Sikhs, Buddhists and Parsis from Bangladesh, Pakistan and Afghanistan after seven years of residence in India even if they do not possess any document. Detractors have called it a “communal move” and that it is biased against Muslims who have been left out.

According to the ruling Bharatiya Janata Party’s critics, the bill is closely linked to the NRC because the CAB will ostensibly help protect non-Muslims who are excluded from the register and face the threat of deportation or internment. The National Register of Citizens is a proposed list of people who can prove they came to India by March 24, 1971, a day before neighbouring Bangladesh separated from Pakistan and became an independent country.

The Supreme Court mandated and monitored exercise was carried out in Assam this year with close to 19 lakh people being left out, but following widespread criticism, including from some BJP leaders as lakhs of Hindus were also excluded, the central government has decided that the process will be repeated in the state along with the rest of the country.

“We are appealing from masjids to please come and rectify all the documents so they have one name and one date of birth. All mosques in whole Karnataka, the imams and khatibs (who deliver sermons during Friday prayers) are appealing in masjids to the people. After that, people are doing this regularly. We have established one counter in the masjid also, to (help filing of corrections online) rectify the documents for free. We have established this counter in this Jamia Masjid also,” Imran told News18.

About 700 to 800 people have approached the counter at this masjid alone over the last two weeks, to take help and get their documents in order.

Common mistakes are names which are mentioned as, for instance, ‘Mohd’ in one document, ‘Mohammad’ in another, and ‘Md’ in a third.

Many have discrepancies in their date of birth as well, as they may have been born at home, and would only have given an approximate date for their documentation, and this may vary from one document to another.

“Illiteracy is a huge problem in our community. So we are creating this awareness. We are circulating a format, highlighting common mistakes, short forms used, etc, to guide them to have uniformity in spelling,” the imam told News18.

Waseem Ahmed, the facilitator appointed at the masjid, says he has been helping members apply for corrections online and ensuring they get the acknowledgements soon, besides taking care of the follow-up documentation, if any.

“A classic case is this: Nijamuddin was the name written in Kannada in one record (for example, records in a Kannada-medium school). But his name is Nizamuddin. Kannada does not have a ‘za’ sound, so they would have used ‘ja’ instead. But it may not be valid later. So we need to get that changed,” Ahmed told News18.