A research scientist works inside a laboratory of India's Serum Institute, the world's largest maker of vaccines, which is working on vaccines against the coronavirus disease (COVID-19) in Pune. (Reuters)

By August 18, Pune had recorded 1,34,913 cases with only Delhi having a higher caseload in India. It accounted for 4.87% of the total number of cases in the country.

Pune recorded 2,432 Covid-19 cases on Tuesday; the highest in the country. While most of the focus has been on Mumbai, Chennai, Delhi and Bengaluru, Covid-19 has significantly spread in Pune, making it the coronavirus capital of the country.

From 14 July, it has consistently recorded more new 24-hour Covid-19 cases than Mumbai for 36 days. On August 16, it overtook Maharashtra’s capital to record the highest cumulative cases in the state and the second-highest in the country after Delhi. 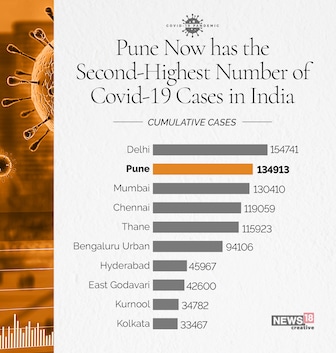 Rising Cases and Spread of Infection

Pune had witnessed 14,000 cases by June 18, and contributed to 3.67% of the total caseload in India. It was number 6 in terms of total Covid-19 cases behind Mumbai, Delhi, Chennai, Thane and Ahmedabad.

The city saw a surge in cases from the end of June and the percentage rose to 4.78% by July 18. It had moved up one position and was now the fifth-most affected city in India.

By August 18, Pune had recorded 1,34,913 cases with only Delhi having a higher caseload in India. It accounted for 4.87% of the total number of cases in the country.

Growth of Cases Over Last Month Pune saw its cases rise by more than two-and-a-half times in the last month – significantly higher than Mumbai, Chennai and Delhi. Kolkata had a similar percentage increase but unlike Pune, had a lower base of infections to begin with. A substantial jump in an already high base resulted in a surge of cases over the last 30 days.

The recent sero survey in Pune showed 51.5% people tested had antibodies against Sars-Cov2, suggesting that a little over half of the samples tested in five high prevalence areas of the city had Covid-19 in the past.

The results indicate that the spread of the virus may be more severe in Pune than Delhi, Mumbai and Ahmedabad, the three other Indian cities where such a survey has been conducted. The corresponding percentage for Delhi was 23.4%, 40% in Mumbai, and 17.61% in Ahmedabad.

One significant difference between the results of Pune and Mumbai was in the spread of the virus in bungalows and apartments. Pune showed a wider spread in bungalows and apartments with 43.9% and 33.2% seropositivity. This was in sharp contrast with Mumbai where 56% seropositivity was reported in clustered slums but only 16% in residential societies. Even with increased testing, the positivity rate has gone up in Pune from 16.04% on July 1 to as high as 24.42% on August 1. This suggests that there was a steep rise in cases between July and August and the rate of spread of the virus was higher than the rate of increase in testing during this period.

Meanwhile, Pune’s weekly positivity rate for the week ending August 18 stands at 28.51%. A high positivity rate is yet another indicator of the extent of the virus' spread in a defined area. 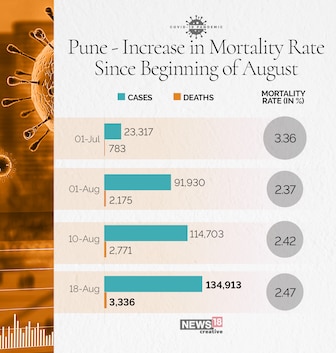 In terms of mortality, Pune has recorded a total of 3,336 deaths by August 18 since the outbreak began. It is the fourth-highest in the country after Mumbai, Delhi and Thane.

However, even as the city has managed to contain the number of Covid-19 deaths since the beginning of the pandemic, the toll has been rising over the last few weeks.

The Mortality Rate which went down significantly from July 1 to August 1 has seen an upward trend thereafter. Pune reported its highest single day toll of 100 on August 14, the only day when the number reached three figures.

The figures are concerning for the city, home to a large elderly and retired population.