World Rhino Day: From 366 to Over 2,500, Slow But Steady Growth of the Beast at Kaziranga in Last 5 Decades

As per the 14th Rhino census conducted earlier this year, there are 2,613 rhinos in the park including 1,670 adult (Image: AFP)

As per the 14th Rhino census conducted earlier this year, there are 2,613 rhinos in the park including 1,670 adults

From just 366 rhinoceroses in 1966, the Kaziranga National Park is now home to at least 2,613 rhinos. In a steady growth, the population of the majestic beast in the park has increased by about 2,250 in more than 55 years.

Kaziranga National Park was formed in 1908 and in 1985 it was declared a World Heritage Site by UNESCO. Home to the highest population of great one-horned rhinoceroses, and the highest density of tigers among protected areas in the world, the park is located in Assam’s Golaghat and Nagaon districts.

As per the 14th Rhino census conducted earlier this year, there are 2,613 rhinos in the park including 1,670 adults, according to the official website of the Kaziranga National Park.

Standing tall along the flood plains of the Brahmaputra River and against the backdrop of the Eastern Himalayas, Kaziranga often draws a comparison with Africa for its rich natural beauty and quality of wildlife viewing. 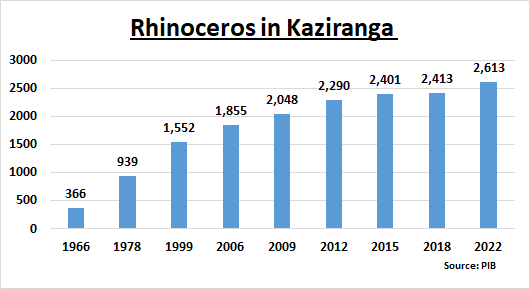 “Due to the floods almost every year, the park witnessed deaths of wild animals including rhinos but this year’s census result is a ray of hope for these endangered species,” the official website of the Kaziranga National Park reads.

Poaching of rhinos in Kaziranga has always been a menace. However, in 2021, just one such case was reported. In the last 21 years, it was the lowest, according to the data shared by the Assam government.

Since 2000, at least 190 cases of rhino poaching were reported with 2013 and 2014 registering the highest cases – 27 each. Since 2017, the poaching incidents have been in the single digits while since 2018, there has been a consistent drop in the poaching cases.

According to the park’s official website, local communities around the area helped a lot to prevent the poaching of rhinos and also helped conserve endangered species and other wild animals.

World Rhino Day is celebrated on September 22 every year, to raise awareness about rhinos and their species.