Police and health officials arrive for inspection after a senior citizen died of COVID-19 at Tipu Nagar in Bengaluru. (PTI)

A 95-year-old World War-II veteran, who had suffered a fracture, was shunted between eight different hospitals in Bengaluru solely because private hospitals simply refused to admit new patients.

Bengaluru: "I don't know how many people are dying of Covid-19, but I think more people are dying due to non-Covid-19," says Lata Sundar, a Bengaluru resident, who has borne the most tragic consequences of the month-long lockdown.

Last week, she lost her father, a 95-year-old World War-II veteran who had suffered a fracture and was shunted between eight different hospitals solely because private hospitals simply refused to admit new patients.

"When you say hospitalised, I have to say he was not hospitalised, as a result of which he died. My father died because of apathy, he did not deserve to die like this," Lata recalls of the trauma she underwent. 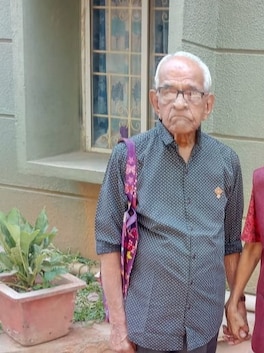 It was around 4 in the morning that her father, MS Thiagaraj, had a fall at his home. She called an ambulance and took him to a hospital where he had been admitted for a urinary infection two months ago and where he had recovered well.

"I told them it was a fall, he was in pain. They viewed him from far, I don’t know what they discussed, but they just asked me to take him to the (government-run) Victoria hospital. I thought maybe this is the new normal, so I took him there for a Covid-19 test. The doctors there said he had no travel or contact history, they were worried he may get infected if he went anywhere near there, and gave me a letter saying no need for a Covid-19 test and sent me back. But when I went back to the first hospital, they made us wait for longer, finally referring us to a third hospital where they said they had already made arrangements for his admission. We moved there, only to be told there was no call from the previous hospital, and they couldn't admit him either," Sundar said.

Her father was perfectly healthy, disciplined in his habits, was used to taking long walks under normal circumstances, doing all household shopping, taking care of his other daughter who is 62 and has mental health issues. He was also the darling of the apartment complex where he hoisted the national flag on Independence Day last year and made a speech urging youngsters to serve the country. He always aspired to live to be a hundred, she says.

After the third hospital — part of a well-known hospital chain — turned her down, the ambulance staff took them to a fourth hospital, a small one where he was admitted to a make-shift ICU. By then, it was already 11 hours since they had been on the road, and hadn't even eaten anything as shops were closed. Despite that, her father was coherent, advising her to take her to a CGHS facility even as she promised him she would get him the best treatment available, whether CGHS-approved or not.

He was admitted at the fourth hospital for three days before she was told that the hospital was shifting out its patients as "the government had ordered small hospitals to shut." She hadn't heard of any such order, but was forced to settle the bill and take her father to yet another private hospital at a time when he was in pain and seemed to be responding poorly.

The ordeal went on for 21 days, cost her nearly Rs 4 lakh, and saw her watching her father sink every day as he battled a recurrence of the urinary infection he had suffered from in February, and that seemed to have recurred sometime during his stay at the fourth hospital where he was housed for three days. It was also there that she realised he was groaning in pain, not as coherent as he was on day 1 of the hospital runaround they did, and the arm fracture seemed to have worsened.

"Lastly, where he died — that was the eighth hospital. My father would have loved to live to be a hundred. We all thought he would hit a century. He died not because of his infection but because of apathy. The hospitals simply refused to admit new patients, it was inhuman. Sometimes I wonder… maybe it would have been better if he was affected by Covid-19. At least then, he would have stood a chance. Here, he did not stand a chance, it was as simple as that. If you are a non-Covid19 patient, you don't stand a chance," Sundar said, adding, "Are we going to save the coronavirus patients or are we going to kill the non-coronavirus ones?"

Sundar is not alone in facing this trauma.

Even as the country grapples to control the pandemic, the non-Covid19 patients have been left in the lurch for their medical care. Patients who require regular support such as pregnant women, cancer patients and dialysis patients are the worst affected. Transport around the city is not easy, and if available, costs a lot. Damned if you have Covid-19, damned if you don’t.

Asha KS, a resident of Indiranagar in Bengaluru, has been battling breast cancer since 2018 after a relapse. As part of her treatment, she has a central venous catheter (CVC) insertion on the left side of her neck which requires regular flushing-out in an ICU environment. She went to hospital after hospital where they refused to admit a non-Covid19 patient. Some hospital staff even refused to go near her to ask what she needed.

"The doctor said he can't dress me up and the staffer who should do it is refusing to touch me. He referred me to two other hospitals. At this new hospital, an old nurse said she could help even though she didn't know what exactly need to be done. I felt it was done the wrong way but I agreed as I had no choice. Next day, it was sticking out. A line that had to be there for the next six months was gone in a day". The CVC is a tube that doctors place in a large vein in the neck, chest, groin or arm to give fluids, blood, or medications or to do medical tests quickly. It requires a weekly dressing change and daily flushing for maintenance.

This 43-year-old is also the primary care-giver for two others at home with health issues.

Regular chemotherapy, hospital appointments and a visit to a hospital in Kerala every three weeks were a routine for her. But since the lockdown, her worries have only compounded. Initially, she looked at it as time off to heal. But with time, even everyday life became difficult for this educationist based in Bengaluru. Managing daily chores in the absence of help has left her feeling more harassed, apart from the lack of medical support.

While patients with serious ailments like these have hit stumbling blocks everywhere they went, there are other patients with less severe complaints who find themselves at a loss on where to turn to. A professor in a west Bengaluru suburb took his four-year-old nephew to two private hospitals for treatment, only to be told to go to a government hospital.

The four-year-old had come on a visit during summer vacations with his mom, and was stranded in the lockdown. "He had a fever, but not every flu is Covid-19. We went to a small hospital first, then to a much bigger referral hospital. They had a flu clinic outside, but they did not even examine the child or ask about any travel or contact history. They directed us to a government facility immediately. We realised that all private hospitals are going to do the same, so we finally just went to a government hospital where a pediatrician gave him a syrup to bring the fever down," he said, requesting anonymity.

While they all realised the fever wasn't high and that since the child had been at home, it couldn’t be any community transmission, they felt they should consult a doctor nonetheless. Pediatric clinics and general clinics were all closed in the neighbourhood.

"These pediatricians who want to advice us on so many things under normal conditions have just closed their clinics now. In a crisis of this kind, shouldn't they be responsible? Kids will play in the sand and water, and they are prone to bacterial infections. Should they not fall sick at all just because they are at home? Parents will naturally worry about small children, so they want to see a doctor. Yes, the doctors must protect themselves, but why reject all patients?" he asks.

His nephew recovered in three days. But when they took him to the government hospital as the private hospitals refused to see him, all he could think about was what if there are Covid-19 positive patients he was unnecessarily exposing the child to.

But there is another side to the story as well. A doctor at a missionary hospital says while their OPDs are shut, their emergency department is open at all times -- but civic officials have asked them to shut their canteens and not allow staff to eat there.

"We realise we need physical distancing, but how do we stop food supply to our nurses, our residents, the other staff who are working additional hours? They say, send packed food, but some of them live in our hostel, and do not have boxes. Should the authorities not be practical when they deal with this? What about people who accompany patients? Can we expect them to stay without food during a three-day hospital stay for, let's say, a child birth?" he asks.

Only this week is Bengaluru seeing some easing of restrictions on movement, but even then there are severe restrictions on more than two persons travelling in a car, and more than one on a two-wheeler. And not everyone who seeks urgent or not-so-urgent medical care can afford ambulances every time they need a dialysis or Swiggy every time they need a meal.