The District Magistrate’s office and Thakur Dheerendra Singh, Member of Legislative Assembly (MLA) from Jewar also maintain that there is still three to four days’ time.

A government notification for land acquisition for the proposed international airport in Jewar. (File photo/PTI)

A source in the Yamuna Expressway Industrial Development Authority (YEIDA) revealed the percentage of families that have consented to the land acquisition process till now is less than number mandated by the Right to Fair Compensation and Transparency in Land Acquisition, Rehabilitation and Resettlement (LARR) Act, 2013. He also said that an internal deadline for acquisition was set for 31 August, but authorities have likely got a week’s extension to complete the land acquisition process.

The District Magistrate’s office and Thakur Dheerendra Singh, Member of Legislative Assembly (MLA) from Jewar also maintain that there is still three to four days’ time.

As of Friday evening, the figure for acquired land, according to the Magistrate’s office, stands 557.9636 hectares out of the 1,300 hectares needed for the project and 1,410 farmers have agreed to give their land. News18 has acquired the official chart that provides data on the land acquisition so far. 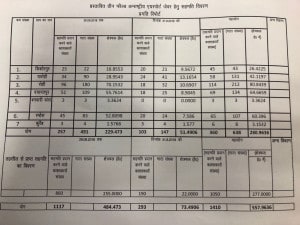 Dheerendra Singh spoke to News18 over the phone “I will go to Rohi (village in Jewar Tehsil) on Saturday and hold a meeting with the villagers and we will reach a solution. There is still three to four days’ time. I had gone to the Ministry of Civil Aviation and talked to Suresh Prabhu (Union Minister) and Jayant Sinha (Minister of State) over the issue. They have extended supported and expressed that they want the airport in Jewar,” he said.

Although negotiations with farmers and their families have been agreeable, especially after the increased compensation package offered by the government, hiccups remain as the deadline approaches.

“As of Friday evening, just over 550 hectares of land has been acquired. The figure stood at around 500 hectares on Thursday evening about 50 more hectares have been added after more farmers consented on Friday,” the YEIDA source said. According to the source, if the required percentage of families do not consent in the coming days, the state government will have to take a decision over the Jewar airport project.

The District Magistrate Brijesh Narayan Singh denied the existence of deadline and maintained that the acquisition will be completed soon. “Over 482 hectares had been acquired from more than 1,300 farmers by Thursday. In fact, the figure has risen today as officers are in the field and the work is in progress. We will get more land and reach the required figure. I’ve been to the area myself and talked to the farmers,” he said.

Prasun Dwivedi, the Sub-Divisional Magistrate (SDM) from Gautam Buddh Nagar, also said the land acquisition process was under progress. “More and more farmers are agreeing every day, despite a few doubts,” he said, though he admitted that the authorities are on a clock. “The internal deadline was just to expedite the work. But even then, we don’t have much time,” he said.

According to the SDM, if an affected family has to give up their house and plot, they will be given a developed plot with an area equivalent to 50 percent of their existing residential plot. A rehabilitative cost of Rs 5,85,000 will also be provided to each affected family. In addition, families will also receive compensation for their residences. “The cost of their present houses will be evaluated by experts and then twice that amount will be paid to them,” Dwivedi said. One member of the affected family will also receive employment in the airport project.

Some affected farmers, however, demand more. In addition to compensation, they also want a government job for one member of the family based on his or her qualifications. The compensation itself, they say should be more.

“The government reclassified this land as ‘Urban’ ahead of the project. Under the LARR Act, had the land remained ‘Rural’, the villagers would have received four times the market value, which stands at around Rs 900 per square metre. This adds up to a compensation of Rs 3,600 per square metre, which some farmers are demanding. ‘Urban’ land acquisition, however, only guarantees two times the market value. So even with the increased rate, farmers are not getting what they should have,” said Choudhary Pushpendra Singh, president of Kishan Shakti Sangh.

According to him, with an upcoming airport, there will be an influx of businesses and the nearby land rates will shoot up. The government will be able to sell spare land at increased rates and make a profit. “The farmers are being cheated,” he said. Singh also said that the older generation of farmers are not keen on selling the land, but the younger generation is willing to sell and relocate to the city, build a house and set up businesses.

Regarding provision of a government job, some officials have said that it is part of the compensation package, however, Dheerendra Singh said that there is no official commitment on the same. Magistrate’s office has maintained that one member from each affected family will be provided a job at the airport or at other industrial development projects that takes place in the area. “I represent the people of the region. The airport will bring rapid development to the region and will create employment for the villagers. We will also try our best to rehabilitate the affected farmers as close to Jewar as possible,” Dheerendra Singh said.