An image of Zubair has been widely circulated in which he is seen bowing down helplessly as a mob using stumps, swords and rods rages at him at the Bhajanpura market in northeast Delhi.

As Mohammad Zubair sits nursing his head injuries and swelling on his hands and feet caused during the recent Delhi riots, his face breaks into a smile on seeing guests pouring in to enquire about his health.

The only time he frowns is when he is informed about how his viral image is being used by the Islamic State to establish itself in India. He has no idea how to deal with it.

"'Zulm hai yeh hum par' (this is cruelty on me)," says Zubair, who is recovering at his relative's place in Delhi's Inderlok. Hitting out at the terror group for sharing his image and calling for retaliatory action in 'Wilayat Al Hind' (province in India), Zubair sought to be left alone at this hour of crisis. 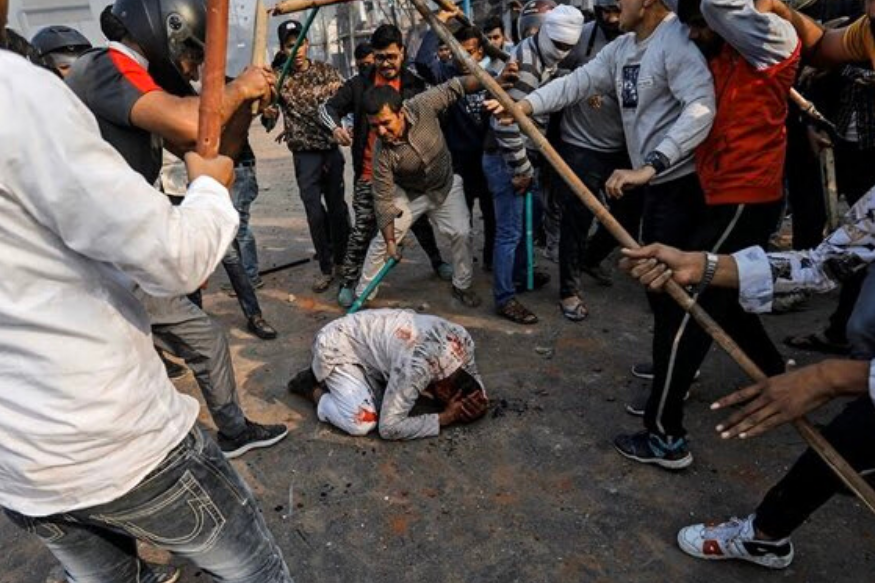 An image of Zubair has been widely circulated in which he is seen bowing down helplessly as a mob using stumps, swords and rods rages at him at the Bhajanpura market in northeast Delhi that witnessed one of the worst communal riots in decades.

He says the photo has become synonymous with Delhi riots, but he feels as much helpless with what the IS is trying to do with the same.

"I don't know what to do about it. The photo captured a moment of violence and all that transpired that day, but appropriating it for someone's self interests is cruelty. It's reckless. It's similar to what politicians do — make a career out of others' losses. This outfit is trying to that with our fate. It can't get worse than this for us," he says. (The image being used by the IS on social media.)

Zubair has sent his wife and three children to their native place in western Uttar Pradesh. He now wants to focus on starting life afresh. "I have a simple life and I have to focus on rebuilding it. I am trying to open a new shop and need support for that. I have so much to worry about at the moment," he says, adding he believes in "forgiveness and moving on".

Relatives and friends are coming to meet him. If they break down crying in front of him, Zubair tells them to have faith in God and be patient.

Zubair will have to visit the doctor again in 10 days to get the stitches removed. "You can see the fracture caused due to the attack by the sharp objects. The mob used the stumps so hard that it broke," he says.

On that fateful Monday, Zubair had gone for his usual prayer at the local mosque and was supposed to return home with "halwa parantha" and "naan khatai" for the children.

Around 4pm, on his way back, he was misled by someone to take a more tense route and suddenly found himself in the middle of a mob who seemed to be baying for his blood.

"I believed the person who told me to take the route to the Bhajanpura market. I had thought of taking the subway. At that point, I couldn't do anything. After the attack, I fell unconscious and was taken to the hospital," he says.

An eternal optimist, Zubair believes time will heal everything. "I still have my limbs working and my focus is to provide a better life for my children," he says.