A special Terrorist and Disruptive Activity (TADA) Court on Thursday sentenced gangster Abu Salem to life imprisonment for his role in the 1993 Mumbai blasts. Salem was extradited from Portugal in 2005. The treaty with Portugal does not allow for a death penalty, so he got away with life imprisonment. Tahir Merchant and Feroz Khan were given death sentence while Karimullah Khan was handed a life sentence.

The convicts and their sentence quantum: The Congress today said justice has finally prevailed in the Mumbai serial blasts case and asserted that India is determined to fight terrorism and punish its perpetrators. "Justice prevails in Mumbai blasts with life imprisonment of Abu Salem. 104 accused convicted so far. Next should be Dawood Ibrahim and Memon," said Randeep Surjewala on Twitter. "India will determinedly fight and punish terrorism. After a long chase, UPA ensured extradition of #AbuSalem in 2005 from Portugal," he tweeted.

The TADA court has also asked for a list of the victims of the 1993 Mumbai blasts to pass directions to the government on the compensation to be given to the victim's families. The judgment copy is likely to be out by this afternoon.

CLICK TO READ | Why Abu Salem Got Life Sentence, While Yakub Memon Was Hanged OP Chatwal, the retired Director General of Investigation, recalls Abu Salem had used the fake identity of a Pakistani national to escape the gallows in India and how an amendment was made to the Indian Extradition Act of 1962 to facilitate his extradition.

"All the sentences are concurrent. Every offence has been attached to the penalty. As per the undertaking given by Government of India, Abu Salem can only be given a maximum 25-year life imprisonment. He was involved in the main conspiracy and had complete knowledge about the blasts," says special counsel DN Salvi.

TADA Court hands out death sentence to Tahir Merchant and Feroz Khan in the 1993 Mumbai Blasts case. Tahir was the one who sent Indian youth for weapons training to Pakistan. Feroz Khan was Dossa’s gang partner and ensured landing of arms and ammunition in Dighi. Khan managed police, customs and after the blasts destroyed the arms and ammunition.

Riyaz Siddique gets 10-year jail term. A life imprisonment was sought. He drove a car from Mumbai to Bharuch to deliver Maruti van and money to Abu Salem. Special cavities were made inside the van to fit the arms and ammunition.

Why Yakub Memon was hanged and Abu Salem only gets 25-year life sentence?

"We had to give an assurance to Portugal that he will not be given death sentence. Without this assurance, he could not have been extradited. Once life imprisonment is given in Portugal, he cannot be kept imprisoned beyond 25 years. He has been convicted of 123 of IPC added with 302, and Section 32 of TADA. The maximum sentence is death sentence but this man cannot be awarded death sentence. This is because of the amendment in law in 1993. He is brought from a country where there is no death sentence. This was 1993 amendment into the Indian Extradition Act, 1962 and Section 34 (c) was added. This was needed because the government of India was facing problems in getting an accused extradited from a country where there was no death sentence. Hence this amendment acted as an assurance to those countries," says OP Chatwal, the man who led the eight-member CBI team to Lisbon to bring Salem and Monica back to Mumbai, exclusively to News18.

TADA court gives Abu Salem gets 25-year life sentence. When he was extradited to India from Portugal, a treaty between both countries does not allow for a death penalty or sentence above 25-years in jail. He knew of the 1993 Mumbai Blasts conspiracy and participated actively in it. He bought arms and ammunition to Mumbai from Bharuch, Gujarat with the knowledge that it’ll be used for a terror attack.

The TADA Court hands out maximum term life sentence and Rs 2 lakh as fine to Karimullah Khan. A death sentence was sought for him. He was a close associate of prime accused Tiger Memon, who is absconding. He ensured smooth landing of RDX at Shekhadi in coastal Maharashtra. Karimullah will be in jail till he breathes his last.

Tushar Deshmukh, who lost his mother in the 1993 Mumbai Blasts, talking to News18 said, "Final closure for us would be when Dawood Ibrahim will be brought to India and hanged."

CLICK TO READ | The 1993 Mumbai Blasts: What Exactly Happened on March 12 That Year Mumbai: On March 12, 1993, the city of Mumbai was rocked by 13 explosions in different parts of the city. It resulted in 257 fatalities and over 700 were injured.

At 1:30 pm on March 12, the first car bomb went off in the basement of the Bombay Stock Exchange building. The 28-story office building and surrounding structures were thoroughly damaged. About 50 were killed in this explosion. Over the next two hour 10 minutes, till 3.40 pm, car bombs and scooter bombs went off at regular intervals at many locations in the city. They were: the Fisherman's Colony in Mahim causeway, Zaveri Bazaar, Plaza Cinema, Century Bazaar, Katha Bazaar, Hotel Sea Rock, the Air India Building, Hotel Juhu Centaur, Worli and the Passport Office. Grenades were lobbed at Sahar Airport.

On March 12, 1993, the city of Mumbai was rocked by 13 explosions in different parts of the city. It resulted in 257 fatalities and over 700 were injured. According to some news reports, the death toll was over 300 and the number of injured stood at 1,400. It is the largest coordinated terror attack to have taken place on Indian soil in terms of the number of casualties. It is also one of the most well-planned terror attacks to have been perpetrated in India apart from the 26/11 Mumbai attacks. It was also the first terror attack on Indian soil in which RDX was used as the explosive material.

CLICK TO READ | Abu Salem: How Dreaded Gangster Rose Out of D-Gang to Chart His Course 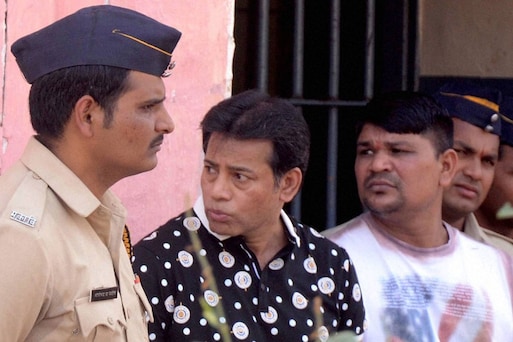 Abu Salem, alias Abdul Saleem Ansari, has been convicted in the blasts case. The rise of this man, who went on to chart his own course in the underworld world, and the eventual fall is stuff films are made of.

Abu Salem’s rising ambit put him into a tussle with Chhota Shakeel, another dreaded gangster. Salem, however, split from the Dawood gang in 1998. He was extorting money from Bollywood producers and directors, with many like Subhash Ghai, Karan Johar, said to have received ‘threats’ from the gangster. It was during his ‘rule’ in Bollywood that he met starlet Monica Bedi. He even pressurized producers to star her in their films. Salem had fled India after the bombings, along with Bedi. The duo landed in Portugal and lived in Lisbon only to be caught in 2002 by the Portuguese police after a tip off from the Interpol.

Abu Salem, alias Abdul Saleem Ansari was born to a lawyer father in Saria Meer in Azamgarh district of Uttar Pradesh, Salem is believed to have come to Delhi and started his career as a taxi driver. He then moved to Mumbai in the mid-1980s and started off as a petty criminal during his stint at a telephone booth in Andheri. During this time, he came in contact with Dawood Ibrahim’s younger brother, Anees. Salem soon rose up the ladder and became a part of the D-gang.

Abu Salem reaches TADA court ahead of quantum of sentence in the 1993 Mumbai blasts case. Others are already present in court. Proceedings will begin soon. The prosecution has sought a death sentence attack for three convicts and life sentence for the other two in the attack that killed 257 persons and injured more than 700.

A timeline of the case — 16 June 2017: A TADA court finds Abu Salem, Mustafa Dossa and Mohammed Dossa guilty of murder and conspiracy in connection with 1993 Mumbai blast case. The court also convicted Firoz Abdul Rashid Khan, and Karimullah Sheikh under charges of conspiracy and murder under sections of IPC, TADA and Explosives Act. The court convicted Tahir Merchant in the case. Abdul Qayoom Shaikh is the lone accused who was acquitted by the special court | 28 June 2017: Convict Mustafa Dossa dies in Mumbai’s JJ Hospital.

A timeline of the case — 25 February 2016: Actor Sanjay Dutt walks free from Pune’s Yerwada jail | 29 May 2017: The TADA court announces 16 June as the date for pronouncement of judgment on trial against Abu Salem and other 6 accused.

A timeline of the case — 31 July 2007: Sanjay Dutt gets six years rigorous imprisonment by the TADA court | 20 August 2007: Sanjay Dutt appeals to the Supreme Court against the 31 July sentence of the TADA court | 1 November 2011: Supreme Court begins hearing on appeals filed by Dutt and 100 other convicts as well as the state | 21 March 2013: SC upholds death sentence of Yakub Memon, transfers death sentence of 10 convicts to life imprisonment and also upholds life imprisonment of 16 out of 18 convicts. The court declares five-year jail term to Dutt and asks him to surrender within four weeks.

A timeline of the case — 29 March 1996: PD Kode appointed as a special TADA judge for the case | March 2001-August 2002: Detailed hearing into the case | 13 June 13: Gangster Abu Salem’s trial separated | 12 September 2006: The court pronounced four members of the Memon family guilty and acquits three. It announced death penalty to 12 other convicts and 20 are given life imprisonment.

Abu Salem was extradited from Portugal in 2005 and under the solemn sovereign assurance given to Portugal, death penalty cannot be awarded to him. The CBI had claimed that the role of Dossa was “more severe” than Yakub Memon, who was hanged in July 2015 in the same case. The CBI had also claimed that Mustafa Dossa, Taher Merchant and Feroz Abdul Rashid Khan, were “main conspirators”.

Arguments over the degree of sentences continued after the conviction in June and concluded on August 10. All accused were facing multiple charges like criminal conspiracy, waging war against the government and murder of people.

A special Terrorist And Disruptive Activity (TADA) Court would pronounce the quantum of sentence against all the convicts of the 1993 Mumbai Bomb Blasts Case on Thursday. The court had convicted six people, including the mastermind of the attack Mustafa Dossa and Abu Salem on June 16 this year.