4 Years of 'MS Dhoni The Untold Story': Here are Pics of Real and Reel-life Mahi

Late actor Sushant Singh Rajput starrer film MS Dhoni: The Untold Story completes four years today. As the name suggests, the film is based on former Indian Men’s cricket team captain Mahendra Singh Dhoni. The plot of the film revolves around Captain Cool’s struggle to reach the Indian Cricket team. It touches upon how Mahi juggled between his Railways’ job and cricket practice, among other things.

On the fourth anniversary of the film, here is a look at some of photos of Sushant Singh Rajput and Mahendra Singh Dhoni together:

In the happy monochrome candid, it can be seen how Sushant is happily playing with Ziva. Dhoni is also spotted smiling while looking at the two. The happy picture will certainly win your heart.

This picture is so heartbreaking 💔 The sudden demise of @sushantsinghrajput left all of us in utter shock and sadness 😔 #gonetoosoon . @zoomtv #ripsushantsinghrajput #SushantSinghRajput #actor #demise #sushantdemise #zoomtv #dhoni #msdhoni

Dhoni and Dhoni at an event

From the looks of the photo, it seems that the candid photo has been clicked at an event. Both Sushant and Mahendra are seen totally engrossed in the happenings of the event.

In the selfie, both Sushant and Dhoni can be seen wearing blue shirts. The duo can be seen smiling away as SSR clicks the snap. Boys and their toys

In this candid picture, captain cool and Sushant can be seen engrossed in playing video games. The snap has been clicked while the two were deeply focused in their game. Both of them have their gaming equipment in hand. 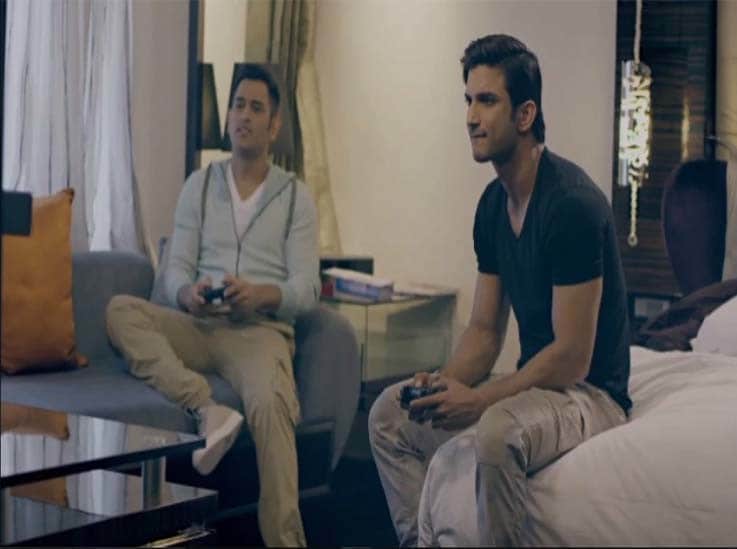 Sushant was found dead on June 14 at his Bandra apartment in Mumbai. The matter of his death is currently being investigated by the Central Bureau of Investigation