New Delhi: The capital is literally bathing in all things fancy, courtesy the ongoing Amazon India Fashion Week Autumn/Winter 2016. Be it with bold-cut blouses or denims, each attire has been given a twist. Not just the traditional wear, the designers even promoted Indian textiles, weaves, crafts and embroidery on day 2.

Here's a quick round up of different lines that were presented on the second day of the premier fashion gala. In every sense that sounds like fashion, Anaikka's line-up was stupendous! 'Lock, Stitch and Gothic' represented an era where while men were focused on fashion, there was always a lady in power. In an exciting turn, Shriya Saran walked the ramp as a showstopper and made heads turn with her unique walking style and a smiling face. The collection further celebrated the essence of 'Victorian' fashion.

Viral, Ashish and Vikrant - Virtues' 'From Gujarat with Love' 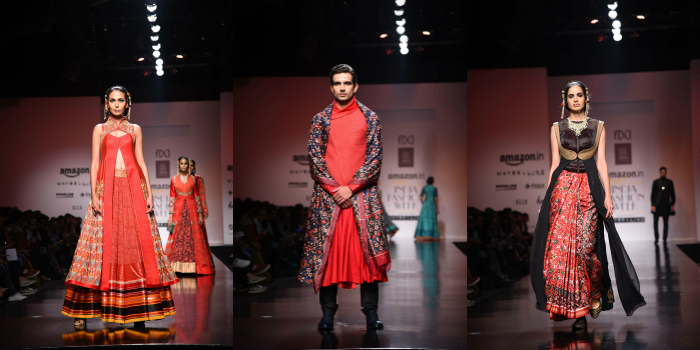 Not just visually appealing, but culturally moving too. Viral, Ashish and Vikrant's Virtues presented a show titled 'From Gujarat with Love' that was just scintillating. Various geometrical designs including chowkadi (square), chhabdi (basket), laheria (strips), phulwadi (floral) donned most of the creations. One of the most creative presentations was that of Rimzim Dadu's. Not only did she leave visitors to interact with the weavers and set up various textile points at different positions on the ramps, but she dared to go bold and experimented with metal wires, leather and some other new fabrics. There was also a hint of 3D applique work in action there. Having Sonam Kapoor as one of his Bollywood fans, the expectations were obviously a little higher with Dhruv Kapoor. The designer set apart his league from punk to romanticism. Involving a lot of summer textiles with a wintry twist, he presented a decent line-up and managed to garner applauds and cheers amidst the hall with the Italian suiting and furry outfits. Based on the theme of Silk Route, this is definitely one of the best things that was offered on day 2. From setting up a fake snow fall on the ramp to utilising Indian motifs at its best, it was more than just appealing! The ensembles included shades of olive green, brown, grey, peach and was pretty much dominated by dull gold at all times. Known for her scintillating silhouettes, Malini Ramini once again bought something new to the ramp. With her collection 'Supernova', inspired by the modern confident women, she bought peacock motifs and gold embroidery in categories ranging from tunics to sarees on the forefront. Romancing with tribal styles, Nikasha made use of vibrantly bright colors in her silhouettes. Shimmery borders and net skirts dominated the collection. Giving a new makeover to embroidered ethnics, the models walked the ramp on Sufi tracks including Kun Faya Kun, Chaap Tilak. Now this is exactly what we call affordable and wearable fashion. While there was a beautiful blend of prints with comforting contemporary fabrics; it just made us say elegant at all times. The collection was mainly dominated by deep prints and deep hues. It was everything gold and everything metallic, to define in simple language. From cotton to satin; various kinds of fabrics were bought on the ramp. Gold leather on a classic plain white shirt and draped dresses; it was pretty much a glamorous ending to day 2.