Entrepreneur Anand Ahuja recently shared a special memory on social media. Taking to his Instagram story, he revealed what was inside his first ever Snapchat message to Sonam Kapoor. Anand had sent Sonam a picture of herself wearing white sneakers of his brand. The two were dating at that time.

Anand shared a pic on Instagram story writing, "PS_ You know that my first ever Snapchat message to Sonam Kapoor, while I was 'courting' her, was about a selfie she posted on Snapchat in these sneakers, right? And I believe, you (Deepika Deepti) got her to wear them." He added, "So see how sneakers bring the world together." 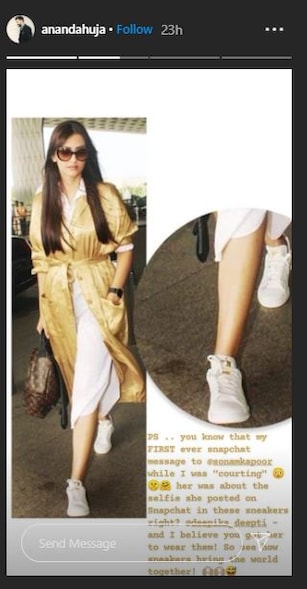 Anand keeps sharing love-filled posts on social media for her wife Sonam. He had recently shared a loved up post for Sonam, which he called, “Girlfriend Appreciation Post!”

He wrote in the caption, “…I love this picture because it captures the beauty, style and ‘NERDINESS’ of my #everydayphenomenal ! ️ #TBT #WillYouBeMyGirlfriend”

Earlier, Sonam had opened up about her first date with Anand during an interaction with Vogue. She stated that after two months of texting they finally met for their first date in London. Anand had not liked the sneakers Sonam was wearing to their date and had later told her that it was her bad sneaker game he fell in love with.

Sonam and Anand married in May 2018. The actress also keeps sharing adorable posts for her husband. Last week, Sonam had shared a rather adorable post for Anand. She wrote, “A husband appreciation post…” along with his photo on Instagram.

Anand is the owner of London based apparel label, Bhaane and sneaker brand VegNonVeg. Anand and Sonam are presently staying at their London residence. They were initially in Delhi during the first few phases of lockdown in India.