On this day, some devotees also observe a fast and also chant ‘Om Namah Shivaya’ and ‘Har Har Mahadev’ while offering prayers at the temple, dedicated to Lord Shiva.

Hindu devotees of Lord Shiva are celebrating the Mahashivratri on Thursday. The festival marks the convergence of Shiva and Shakti, when the masculine and feminine energies, which balance the world, are blended. On this day, some devotees also observe a fast and also chant ‘Om Namah Shivaya’ and ‘Har Har Mahadev’ while offering prayers at the temple, dedicated to Lord Shiva.

Let us take a look at how your favourite celebrities are marking this auspicious occasion:

Telugu superstar Mahesh Babu wished his fans a happy Mahashivratri via his Instagram Story. The actor wished for hope, peace, strength and happiness for his fans on the occasion. 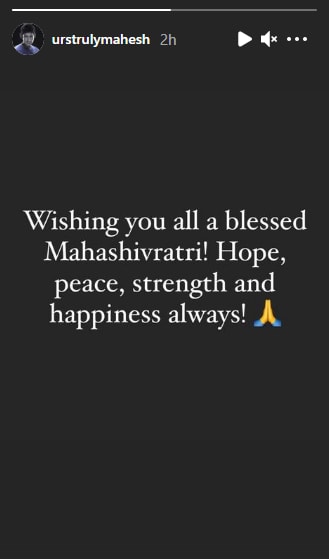 Bollywood actor and producer Ajay Devgn posted a picture from his 2016 movie Shivaay where he is seen sporting a trishul tattoo on his back. Captioning the post with a Hindi Shloka, Ajay wished a Happy Mahashivratri with “Om Namah Shivaya”.

Actor and producer Akshay Kumar also wished his fans a happy Maha Shivratri and took the occasion to share the motion poster of his friend and colleague Ganesh Acharya’s motion poster for his upcoming movie,Dehati Disco.

Television actress Rupali Ganguly also dedicated her recent Instagram post to the Hindu God. Sharing a picture featuring the Shiv Linga, Rupali described Lord Shiva as the Creator, the Preserver, the Destroyer and said that he is "All". Ending the caption, Rupali hailed Shiva and wrote, ‘Har Har Mahadev’ and wished her fans and family a happy Maha Shivratri.

Mouni Roy shared a picture from an ancient temple of Lord Shiva. Prostrating in front of a Shiva Linga that was decorated with rose petals and a white cloth, Mouni offered her respects to the Hindu God. The actress wrote in the caption, that Shiva is her dream, desire, destiny intertwined, and her dawn to dusk.

Shruti Haasan also took to her Instagram Story to share a picture of Lord Shiva as she wished her followers a happy Maha Shivratri. 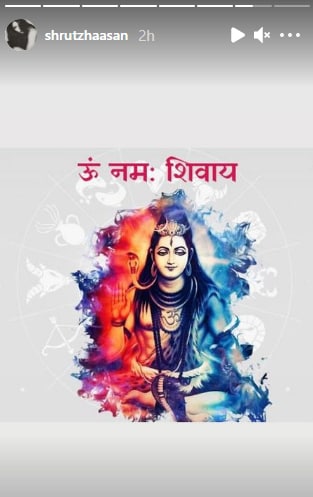 Happy Mahashivratri to all. May the divine always guide you towards the better.