Looks like Kareena Kapoor Khan has shed a few kilos already and is glowing just like before, just two months after the birth of her son Taimur Ali Khan.

Looks like Kareena Kapoor Khan has shed a few kilos already and is glowing just like before, just two months after the birth of her son Taimur Ali Khan.

“The idea is to have faith. And to do it all in a continuous, sustainable way,” the Kareena said in a Facebook Live chat on Tuesday.

The live chat was extremely interactive with thousands of people, especially women, commenting on it with their diet queries.

Kareena Kapoor Khan put on 18kg during her pregnancy, and claims to have had a lot of ghee and parathas while she was carrying Taimur.

“And I flaunted it, double chin and all, until the day I walked into the hospital. People said I could eat grilled fish or meat to avoid putting on weight. But I wanted to do it the conventional way, the right way. So I ate it all, but in the right quantities,” she said.

According to her dietician Rujuta Diwekar, the target for Kapoor Khan has always been to take a step at a time and not rush the process.

“Because we don’t want to go one step forward and two steps back, which is what happens when you do a crash or extreme diet,” Diwekar, who was also a part of the live chat, said.


Pls note that FB live with #KareenaKapoorKhan will be at 5pm today and not 4pm. Thank you. See you all at 5pm (IST).

Prioritizing health over weight loss, Kareena said “My aim is not just to lose the weight I had put on. I don’t want to do it overnight. It may take long, but I want to feel light, happy and energetic throughout the process. And that is important,”. “One very important thing all women should know is that in one pregnancy, you lose five years of calcium in the body,” Kapoor Khan said. “So getting back into shape also means accelerating the calcium levels in the body.”

She has been religiously having a tall glass of milk every night.

Dairy has a lot of CLA (conjugated linoleic acid) that helps you burn more fat, Diwekar explained. “And also short chain fatty acids that lead to mobilisation of fat from stubborn areas, such as the tummy,” she said.

For women who have just had a baby, this interaction had a lot of good takeaways on how to get back into shape while building and maintaining a strong body post pregnancy.

Increase Intake of Vitamin B12 and Iron

Diwekar suggested increasing the intake of foods that have a high content of Vitamin B12 and iron, such as dahi, chaach and pickle to get rid of the dark circles a lot of women develop postpartum.

“Even til ka laddoos (sesame seed) that Kareena loves has a lot of B12 and iron that help get rid of dark circles. But no binging—everything should be had in controlled amounts.”

Coconut with jaggery and bajra roti with ghee and gur are other things you may eat for upping your iron levels.

“I was in panic mode post my delivery to lose all the weight I had gained,” Kapoor Khan said. “I even insisted Rujuta to put me back on my Tashan diet. But she told me we can’t do that now as this time, we need to get my body back in shape in a progressive manner.”


She was quite apprehensive about the rice she had been asked to eat—that too twice a day!

“The reason is that eating rice allows you to bring back a lot of the good bacteria that something as strenuous as a delivery may wash out,” Diwekar explained.

One thing that the duo talked about repeatedly was the importance of refraining from crash diets.

“That is what leads to a lot of lifestyle disorders, such as post pregnancy thyroid,” Diwekar warned. “Because when you’re on a crash diet, you reduce the calorie intake so much that your body is forced to slow down its metabolism.”

It’s also important to not just lose weight but to rebuild your bone and muscle density.

As for exercises to supplement your diet to get back in shape, the actor and her dietician swear by walking.

“Rujuta always says that walking is the best exercise in the world. Post pregnancy, when even getting on a treadmill can be tough, 20-30 minutes of walking can really help,” Kapoor Khan said. “It has helped me beautifully. I can already feel my core strength increasing.”

#KareenaKapoorKhan the girl who redefines fitness and flawlessness every single time. #valentinesday #allnatural

The new mom set a new trend of maternity fashion in India and showed how one can look chic while pregnant. Also, post-pregnancy, she looked resplendent as the showstopper for designer Anita Dongre at the Lakme Fashion Week. 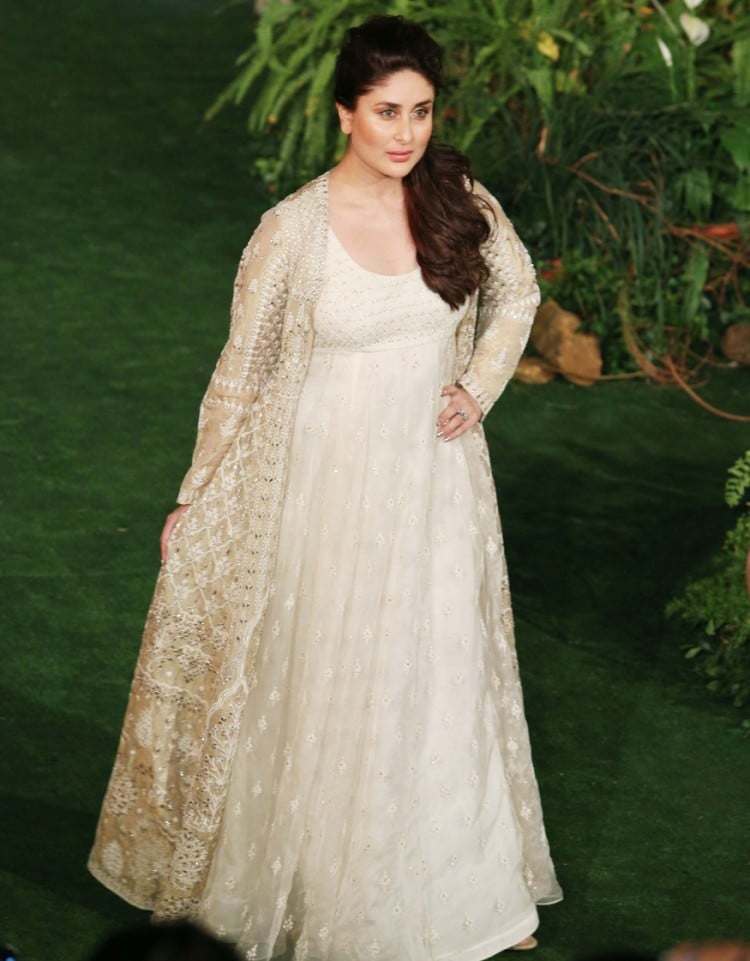