Home » News » Lifestyle » History, tradition and rituals: All you wanted to know about Teej
3-MIN READ

History, tradition and rituals: All you wanted to know about Teej

Teej, a three-day-long Hindu festival, is dedicated to Lord Shiva and Goddess Parvati. It falls in the month of Shravana or Sawan and Bhadrapada or Bhado, that corresponds to the Indian monsoon season of July - August - September. The exact day on which it is celebrated is determined by the moon’s cycle.

Teej, a three-day-long Hindu festival, is dedicated to Lord Shiva and Goddess Parvati. It falls in the month of Shravana or Sawan and Bhadrapada or Bhado, that corresponds to the Indian monsoon season of July - August - September. The exact day on which it is celebrated is determined by the moon’s cycle.

This festival is celebrated in different states - Rajasthan, Bihar, UP, Punjab, Jaipur, Haryana and even Kathmandu - and different religions with different names. The Sindhi community also celebrates this festival by the name of Teejri.

There are 3 variants of Teej festival, namely Hariyali, Kajari and Hartalika Teej. Each of them is celebrated with equal vigour and fervour by women.

On the occasion of Kajari Teej, we bring you an insight into the Teej celebrations. Kajari Teej, also known as Badi teej falls during Krishna Paksha of Bhadrapada month according to the North Indian calendar.

This festival is a symbol of dedication of goddess Parvati for Lord Shiva. Even today, women commemorate this mythological event by keep a ‘Nirjara Vrat’ for their husband’s well being and long life. This festival also helps in strengthening the bond between couples. This festival also welcomes the advent of Monsoon season. In Hindu mythology, it is believed that Goddess Parvati and Lord Shiva were united on this day. For this Parvati had to endure penance. It is said that she took 108 births on Earth before Lord Shiva accepted her as his wife. Since then, this day is considered to be an auspicious day and it is believed that whosoever remembers her on this day will be blessed with a happy married life and all her desires will be fulfilled.

The 3 day festival is a symbol of happiness and joy in a married life. On this day, women dress up like newly weds in colours like red and green and try to look their best to lure their husbands. They apply henna/mehendi and wear colourful bangles which are symbolism of a newly-wed bride. Each day has its own significance, starting with the first that is called Dar Khane Din, on which the ladies enjoy a feast prepared by the men. The second day is the fasting day and the third is for offering prayers to the deity.

The holy custom of fasting is synonym to the Teej festival which is a tribute to the penance that Goddess Durga had to go through for 100 years before Lord Shiva accepted her as his wife. The married ladies observe fast – they neither drink water, nor take food for the entire day. One special aspect of Teej celebrations is the ‘Teej Katha’ that includes the stories of the legends associated to the festival. In the evening, the women gather to hear the narration of this Katha and pray for good health of their husbands and husbands-to-be and a blissful married life. Teej Puja begins with the offerings of flowers and fruits to the goddess.

Other important traditions of this festival include the lighting of an oil lamp throughout the day. In some states, women bathe with red mud to purify themselves. It is believed that after this holy bath, a woman is absolved from all past sins. Only when the moon appears in the sky, these women complete their fast and have a scrumptious feast. 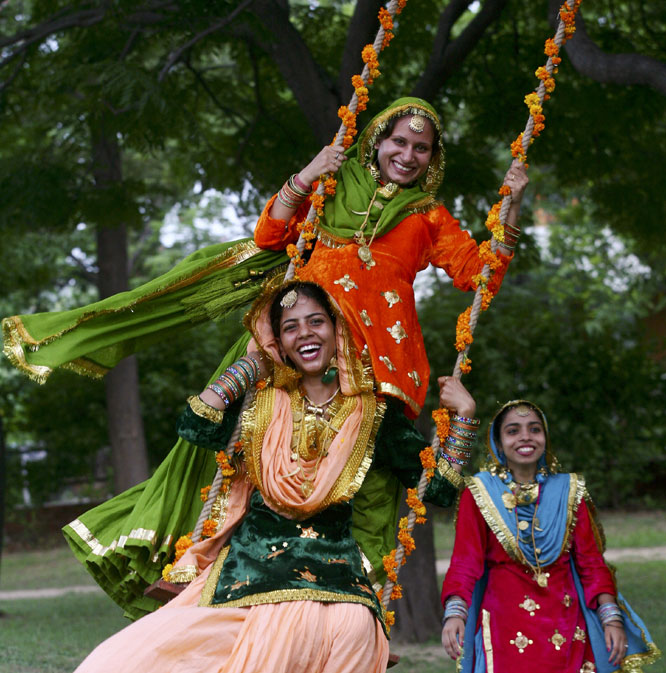 Apart from the Puja ceremonies, the tradition of swings fastened to tree branches is also associated to this festival.