Taking the humorous route, Kunal Kemmu shared a video where he filmed himself during the Mumbai power cut situation. Check out Kareena Kapoor's reaction to it.

Social media was abuzz with Bollywood celebrities’ posts on October 12 as Mumbai experienced a massive and unprecedented power cut. While several celebs advised people not to panic, actor Kunal Kemmu sent out a message in his own way. Taking the humorous route, Kunal shared a video where he filmed himself reacting to the power cut situation. In his reaction video, Kunal draws comparisons between people reacting to lights off outside of Mumbai with those who reside within the city.

The video opens with the text flashing, 'When electricity goes in anywhere but Mumbai,' on the screen. A few moments later, Kunal asks about when the power will be back in a Haryanvi accent. He then patiently asks for a handheld fan and goes off to sleep.

Again, 'When electricity goes in Mumbai' flashed on the screen, Kunal acts like a calm man talking to his friend on the phone. He starts panicking when he learns the power won't return for the next couple of hours.

Kunal’s sister-in-law Kareena Kapoor Khan also found the video highly relatable and reposted it on her Instagram stories. The actress was evidently ticked as she wrote, “Best video on” and accompanied it with several laughing loud emojis. 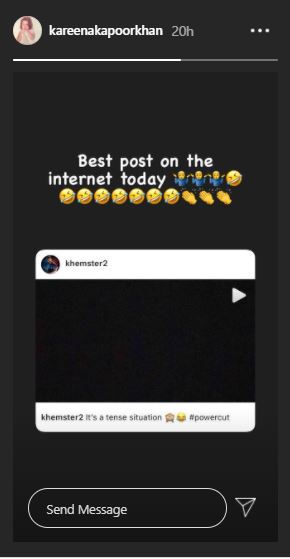 On the work front, Kunal was last seen in the comedy film Lootcase helmed by debutant director Rajesh Krishnan. He also fronts web series Abhay Season 2. The crime thriller features Ram Kapoor as the antagonist. Whereas, Kareena will be seen in Laal Singh Chaddha headlined by Aamir Khan and directed by Advait Chandan.