Kareena Kapoor Khan looked like a dream in a Falguni-Shane Peacock gold lehenga as she closed the show for the designer duo on day 2 of India Couture Week 2018.

Actress Kareena Kapoor Khan enthralled the guests as she made a grand entry during Falguni and Shane Peacock’s debut show at the ongoing India Couture Week 2018 in Delhi, where the designer duo showcased their collection Amour De Junagarh.

While each model walked the runway with unmatchable grace, it was Khan who stole everyone's thunder as she closed the show in a glamorous gold embellished A-line lehenga that weighed approximately 30 kgs. Khan teamed her lehenga with a matching full-sleeve blouse with a plunging neckline and a nude glittering dupatta that featured the duo’s signature feather twist. Shimmery, dewy makeup and soft curls rounded off Khan's look.

While addressing the media, Khan said she felt like a shining star in the gold ensemble that she wore. Khan also revealed that if it wasn't for Falguni and Shane Peacock, she wouldn't have ever worn such a heavy ensemble. “I have walked the ramp for about 10 years and more, but this is the first time I am wearing an outfit that weighs 30 kgs and if weren’t for Falguni and Shane, I wouldn’t have done this,” she said.

The designers' collection featured a medley between the queen of the French capital and the grand palace of Junagarh – Rajasthan’s cultural jewel. Channelling the spirit of a traditional mela, inside the palatial walls of the juna mahal – the designer duo contrived a lustrous mayhem of all things beautiful under one roof.

While speaking about the collection, Khan said, “When you talk about couture in India, the first name that comes to your mind is that of Shane and Falguni. Whether it is for their cuts for the gowns, lehengas or the fact that they mix Indian and Western so well is what sets them apart.” On being asked about any pre-runway rituals she follows, Khan said although she feels nervous each time she has to walk the ramp, she never follows any rituals to look confident in front of the camera. “No one believes me but I am really nervous; that is because I come across as a very confident girl, but actually ramp is the only thing that makes nervous in life.”

“When you are wearing such a gorgeous outfit it gives you that confidence, it makes you look beautiful and you just sashay down the ramp,” she added. 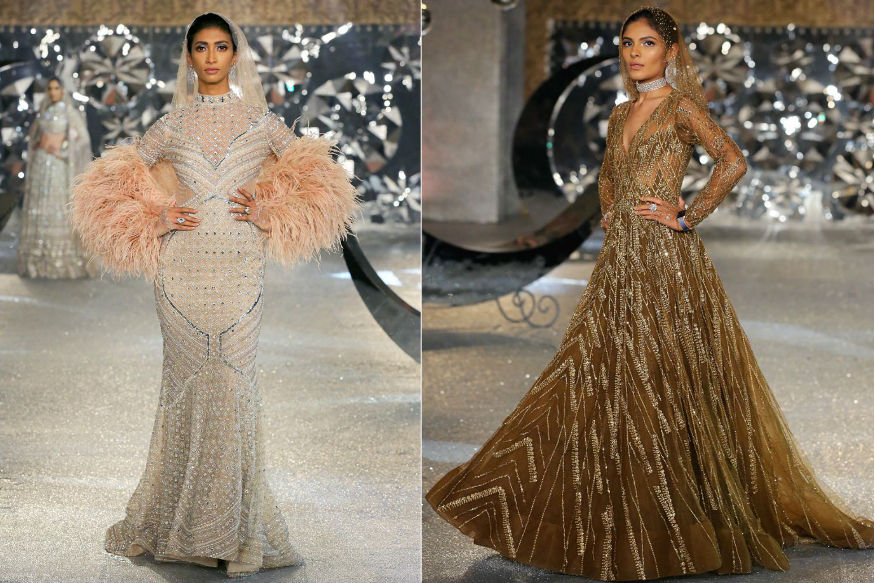