Dressed in a black and white attire with a grey belt wrapped around his Kimono jacket, Kartik Aaryan looked dapper as he took to the runway in style.

Actor Kartik Aaryan, who is currently basking in the success of his film Sonu Ki Titu Ki Sweety, turned up the heat at the ongoing FDCI Amazon India Fashion Week Day 2, as he took to the ramp for designer Pawan Sachdeva.

Dressed in a relaxed and sporty black and white attire -- Kimono jacket teamed with a cowl-neck kurta and flared pant -- with a grey belt wrapped around his jacket, Kartik looked dapper as he took to the runway in style. Speaking about walking the ramp for Pawan Sachdeva and a few other interesting things, actor Kartik Aaryan, in an exclusive interview with News18.com said, "It's (collection) young and edgy and trendy, it's something that is very comfortable and I really like the idea of Kimono jacket and a belt around it. It's very thoughtful of Pawan and his team to make a design like this."

Talking about having butterflies in the stomach before taking to the ramp, Kartik said that he had none since his experience of modeling during college days instilled that confidence in him. "There's this familiarity of ramps, and ramp walks and modelling with me, so, I guess I am excited whenever I get a chance like this."

When asked if there was someone he looked upto for style inspiration, Kartik said, "I try keeping things simple, don't look up for inspiration. I am someone with a very simple taste.I try to wear solid colours and I don't overdo it." 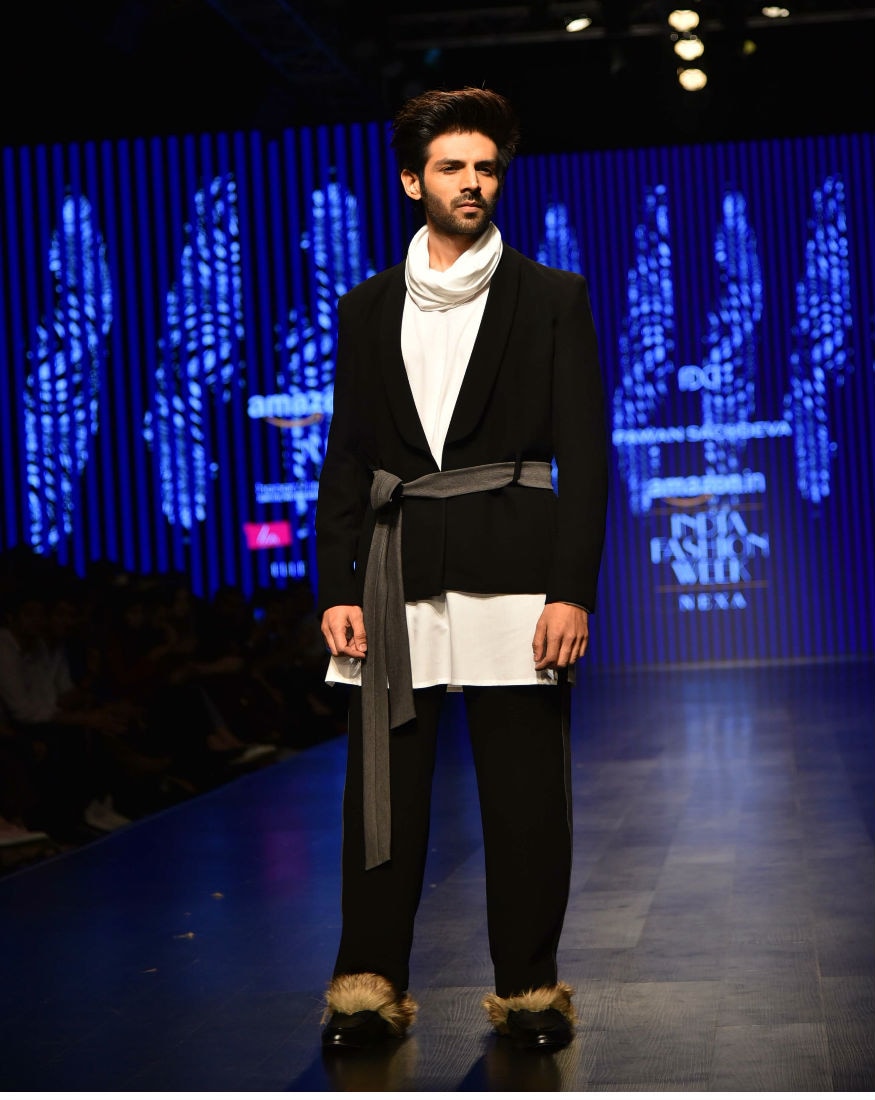 Pawan Sachdeva's menswear only collection 'Animate' was all about walking into the wild with a wide variety of animals beautify adorned in prints and embroidery with a splash of colors making the line lively and fresh.

"The collection is about modern and relaxed cuts. We have used a lot of animal graphics on the garments and detailed them with embroidery. The colour palette is black, blues, midnight blues and greys. Also, the we used fake fur mules as footwear for the line," said designer Pawan Sachdeva in an exclusive post show interaction with News18.com. While the designs were breathtaking, the silhouettes were clean and modern, perfectly blending with the soft belts with a variety that is changing from belted trousers to normal fitting trouser with details at hem. The jackets were a variety which included zipper looks, belted looks, men shrugs and capes.

The color palette was an amalgamation of the shades of black, white, blue, tan, and grey with a color detail of red, yellow.