News18» News»Lifestyle»Kishore Kumar's songs will continue to be relevant for many generations to come: Anshuman Jha
3-MIN READ

Kishore Kumar's songs will continue to be relevant for many generations to come: Anshuman Jha

With the true retro look in psychedelic colours, interesting props and amazing audience participation, 'Jhumroo' manages to have people cheer, sway and love all acts.

If there is one debate between the fans of cinema and live theatre which will continue to remain constant, it has to be - whether films that are invariably a sell-out, with almost repeated stories are better than live theatre. Actor Anshuman Jha, who plays the lead in Bollywood musical 'Jhumroo', feels both the art forms have the credibility to affect the viewers in a personal way.

“Even though I’m really young to state which medium is better - I’d like to define theatre as meditation and cinema as euphoria,“ he says. 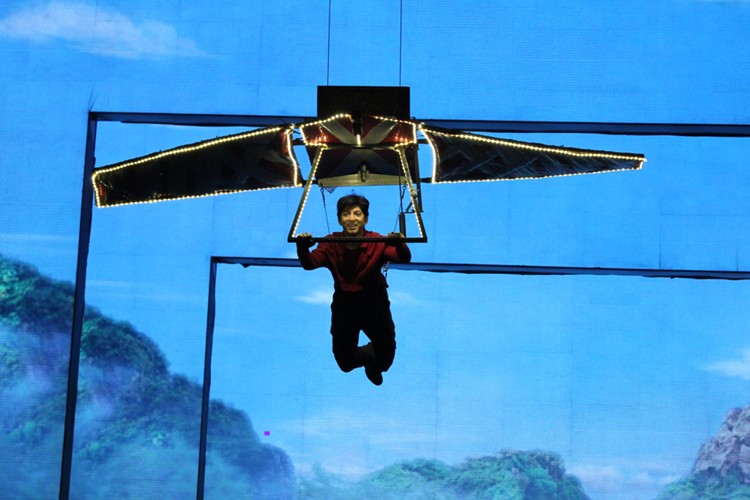 Even though both stage and screen have their own limitations and advantages, both the mediums are enchanting. “The camera gives me a different kind of a high. When I see a good shot on camera, the excitement is huge. The best thing about the camera is that it helps the actor to know if he has given a good shot or not. And to watch a good shot on the monitor, is an amazing experience. This is because as an actor you are already aware of the impact that it will leave on people who will watch it. In theatre – everything happens in a moment. Hence, there is no time to assess, judge and think. However, you know you’ve done good a show, if there is a proper rhythm. Theatre tests you as an actor. But it is important to understand that stage and screen are two different mediums of entertainment.”

Since Anshuman has worked under the likes of Barry John, Quasar Padamsee, Joy Fernandes and Jaimini Pathak, and also represented India at Contact-World Theatre Fest in 2010 with his play ‘Dirty Talk’, it is understandable why he isn’t appreciative of those who pretend to be actors. “Most of the commercial actors over whom girls go gaga are pathetic. I have no respect for actors who don’t prepare. There is nothing wrong in not knowing the craft, but there is something wrong when you know nothing and still pretend to be a know-it-all.” As the actor says, the live musical comedy ‘Jhumroo’ which explains the spirit of Kishore Kumar in the most convincing way, plays a key role in bridging the gap between theatre and audiences. “For me, Kingdom of Dreams is the only venue in the entire country that gives me a theatrical experience which is cinematic and grand. It offers - sound, light, dance, music and acting. As far as writing is concerned, it is audience friendly too. Every factor used helps people to have fun. This complete wholesome entertainment that KOD offers is the attraction for me.”

With the true retro look in psychedelic colours, interesting props and amazing audience participation, 'Jhumroo' manages to have people cheer, sway and love all acts. And true to its tagline, "Jhoomo! Naacho! Gao!", the musical gives the viewers multiple opportunities to have an unforgettable experience.

While the classic melodies of Kishore Kumar help the audience understand Bhola’s (Anshuman) love, struggles and pain, the legendary singer has also been successful in offering some interesting life hacks to the actor in real life.

“I was born in Allahabad. And at that time, we would only have VHS cassettes to watch films. Kyunki ghar pe 'Half Ticket' ki ek hi VHS cassette thi toh maine who baar baar dekhi. And that made realise just how significant Kishore Kumar is. He performed to make people happy. Even though he wasn’t a trained singer, his voice and songs can never be confined to a particular time period. His songs were relevant to several generations in the past and will continue to be so for many more generations to come. Like Alfred Hitchcock, KK is timeless. Through my interactions with KK in the play, I realised the need to stay motivated in life. He inspires us to never give up, and do what’s right in life. If you pick up any of his works you’d realise each of it is done in the right manner. He was brilliant in everything he did." Even though his performance as Bhola, will expand his fan base, Anshuman feels giving audience a memorable time through his act is far more important. “I love all my fans, but fan base has become the biggest sham with people buying followers on Twitter and Facebook. I’d be delighted if the 300 people before which I performed had a good time. I’ll be successful if the audience will remember me for my performance - it is an experience for life.”