Read on to know more about the significance and celebration of Mahashivratri festival.

Maha Shivaratri is a great festival in Hinduism, celebrated annually with the devotion and religious enthusiasm in the honor of the Lord Shiva, deities of Hindu Trinity. The literal meaning of Shivaratri is “The Great Night of Lord Shiva”. According to the Hindu calendar, it is celebrated in the Varanasi in the dark fortnight or Krishna Paksha at the 13th night or 14th day of the month Maagha or Phalguna (month of February or March according to the English calendar) to worship Shiva Lingam to make happy the Lord Shiva. According the most prevalent legend of Mahashivratri, during the great mythical churning of the ocean – Samudra Manthan conducted by the gods and demons for obtaining nectar to make them immortal, first a pot of poison emerged. The poison was so potent that nobody was ready to even touch it as it had the power to burn up the whole world.

It was decided that the only one who could help them get rid of this poison was Lord Shiva. So they all went to him for help, and Shiva promptly agreed to consume the poison. However, the poison was so deadly that even if a drop had entered Lord Shiva’s stomach (his stomach represents the universe), it would have annihilated the whole world.

Shiva carefully held the poison in his throat which turned blue due to the effect of the poison, and so he came to be known as Neelkanth. Maha Shivaratri is celebrated as a day of gratitude to Lord Shiva for protecting the world from this deadly poison. 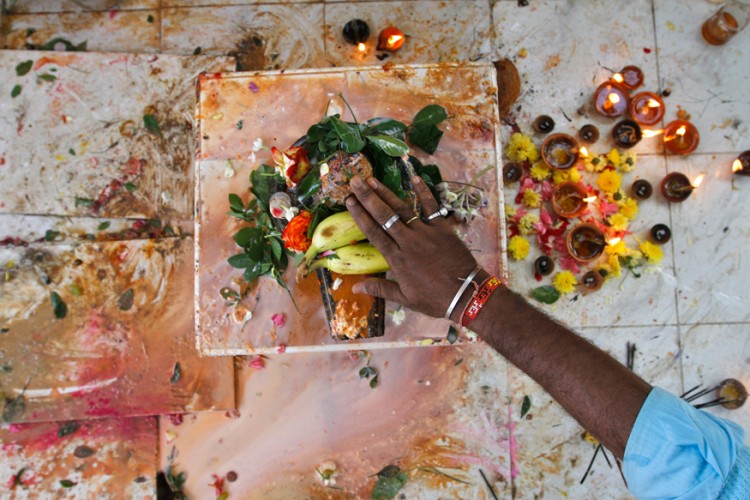 At Maha Shivratri, People keep fast of whole day and night and Kashi Vishwanath temple gets congregated by the young and old devotees from the very early morning. They come to the temple to perform the puja of traditional Shivalingam and hope to get what they have prayed to the god. They take bath in the holy water of the Ganga (Symbol of the purity) early in the morning before sunrise and wear a clean clothe after the sacred bath.

According to the Shiva Purana, the Mahashivaratri puja involves six steps which are:

Taking bath in the Gange for purification of soul, mind and body. Bathing of the Shiv Linga with the holy water of Gange, then bathing with milk and honey. God Shiva loves bel patra (three leaves stalked in one) so every rituals added it to the puja.

After bathing of the Shiv Linga, vermilion paste applied on it which represents the virtue.

Offer fruits, flowers which are given to get long life and satisfaction of desires.

Worshipers also apply three horizontal lines of holy ash on their forehead just like the Lord Shiva which represents spiritual knowledge, cleanliness and penance. They wear garland made up of the Rudraksha (seed of Rudraksha tree) while worshiping the Lord Shiva. It is believed that Rudraksha tree was originated from the tears of Lord Shiva. Shivaratri is also considered as the wedding day of the Lord Shiva and Mata Parvati.

Many people observe a fast on this day. They eat fruits, Kheer of Sabudana, Even Ramdana and Halwa of Kattu is also consumed.