When a fashion show joins hands with sex workers and their children, it turns out to be something as amazing as what Lakme Fashion Week Summer/Resort 2017 had in store for the viewers on day 2. The second day was a star-studded one – with the likes of Preity Zinta, Regina Cassandra, Adah Sharma turning showstoppers and Mugdha Ghodse, Shabana Azmi, Priyanka Bose, Urvashi Rautela and others gracing the first row for many designers but what led the galaxy of stars to fade - was Mandeep Nagi’s ‘Shades of India’ show in collaboration with Krani – an NGO.

The show wasn’t the usual kind with models strutting down the runway but with girls from Mumbai’s Red Light areas showcasing the collection. They didn’t sashay down the ramp as one expected them to but instead narrated their tales through the course of time – childhood, teenage, red light area, school and NGO. The show, presented at the 6Degree Studio, moved to tears many from the audience and received a standing ovation at the end. Never has Mandeel Nagi reflected her designs on professional models but the on women she considers to be important. She once chose her household help and now she brought on ramp the girls from Mumbai’s red light areas to present her lineup.

“Unfortunately, fashion only rarely makes social statements. That’s why an event like this is so important. It does show that designers can explore alternative ways of reaching their audience – ways that draw attention to important issues but also excite their audience by wearing clothes differently”, she added. She stressed on the fact that the perspective of people about girls hailing from red light area needs to change. “Many girls have ended up in the red-light areas though very unfortunate circumstances. They can’t forget their past. But they need to re-build their confidence, their belief in life and to see that they can join the mainstream of society”. She further added that Kranti – the NGO – is playing a big contribution in it.

Even though she believes that changes have occurred, she has no qualms in accepting that they’ve been slow ones. “People still cling to old attitudes. But events like this show, have mounted a force for change. I want to see a society in which doors are open for everyone – whatever their background”.

She strongly believes that opportunities like these will open new doors for these girls. “I’m very positive about this. These girls come from very disadvantaged backgrounds. An event like this allows them to show their pride and independence, it develops their confidence and provides a proof they can do something different with their lives”. 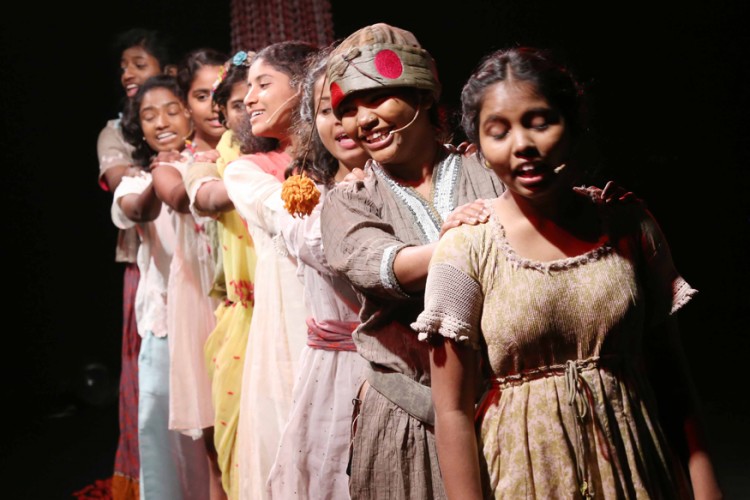 Her ‘Bagh’ collection comprised the nobility of a courtly dress combined with a stylish bohemianism. The colour palette ranged from whites, orchids, pinks and hazes and the fabrics moved from hand woven cottons to silks.