This Photo of Varun Dhawan with Karan Johar’s Son Yash is Too Cute for Words; See Pics

Karan Johar misses no chance of sharing candid moments of his little munchkins Yash and Roohi.

Karan Johar misses no chance of sharing candid moments of his little munchkins Yash and Roohi.

There is no doubt about the fact that filmmaker-turned-producer Karan Johar is a devoted father to twins Yash Johar and Roohi Johar and that most celebrities love spending time with his kids.

In a recent Insta Story shared by Karan on the photo-sharing platform, the filmmaker’s son Yash can be seen playing happily with actor Varun Dhawan on a rooftop.

The two — Varun and Yash — who were twinning in blue outfits looked absolutely at ease in each other’s company with the actor holding little Yash in his arms.

Karan perfectly captioned the image ‘Twinning’, before sharing it on the social media platform. 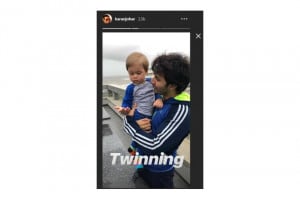 In another Insta story, Karan shared a boomerang video of Yash enjoying the peaceful wind. He captioned it, "Gone with the wind." 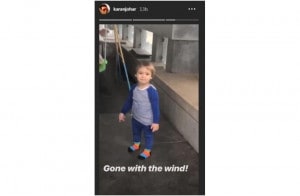 He also added a picture of the little one sitting on his best friend and CEO of Dharma Productions Apoorva Mehta’s lap. The caption read: “My oldest and youngest BFF”. 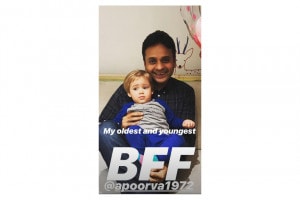 While Varun will next be seen in Sui Dhaaga - Made in India, alongside Anushka Sharma. The film is slated to release on September 28, 2018.