Besides Shri Krishna and Mahabharat, Dangal's Mahima Shanidev Ki is at the number three spot on most watched shows on TV.

Ramanand Sagar's mythological show Shri Krishna, which first premiered in the 90s, made a comeback on TV amid the lockdown. As per the latest Broadcast Audience Research Channel (BARC) reports, its re-run has become the most watched show on TV.

BARC has released the viewing pattern of the Indian audiences in between June 20 and 26, and it says that DD National's Shri Krishna is holding the top position in terms of TRPs for the second consecutive week. It’s followed by Star Plus' Mahabharat. The cast of Mahabharat includes popular names like-- Sourabh Raaj Jain, Shaheer Sheikh, Pooja Sharma, Aham Sharma, Arav Chowdhary and Arpit Ranka. 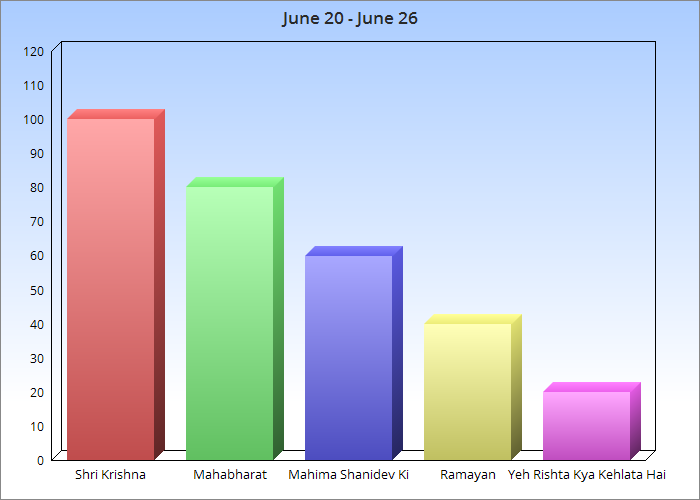 Besides Shri Krishna and Mahabharat, Dangal's Mahima Shanidev Ki is at the number three spot on most watched shows on TV.

It is followed by Star Plus' Ramayan at the number four spot in the list of top five programmes of the week. This show too, was first premiered in the eighties, and made a comeback on TV amid the lockdown.

At number five is Star Utsav's Yeh Rishta Kya Kehlata Hai. The channel is running the old episodes of the TV's popular show. The show, which has successfully completed over 3000 episodes, is one of the longest-running shows on TV. Also, it is new entry in the top five shows of the week.

As per the details divulged by BARC, it can be concluded that mythological show Ramayan is no where close to leaving the TRRs list and TV's most popular show Yeh Rishta Kya Kehlata Hai's old episodes has made its place in the week's most watched shows list.