Under The Skin, Behind The Scenes: Creating Fashion Week's Glamorous Makeup Looks

At fashion shows, there’s always something more to look out for than the usual runway trends and studio shows. A mélange of people from all walks of life gather to celebrate the one thing they love most and something that they consider as an outlet for their expression. As they slip into the trendiest of their fashion choices, it’s their makeup (or no makeup) that enhances their look and makes them either stand out or disappear in a crowd. More so, even on the runways, it’s the combination of makeup, hair and styling that breathes life into the designer’s creations.

“Makeup is a key factor in enhancing a collection. The hair and the makeup, both, help to finish off a look which is a designer’s piece of course. I think that all the factors together- everything together is what makes it the best it can be,” said Donald Simrock, Lakme Makeup Expert in an interaction with News18.com on the sidelines of Lakme Fashion Week Summer/Resort 2018. “I don’t think it’s something that dramatically changes somebody’s look within itself but I think they are all equally important,” he added.

While the fashion extravaganza lasts four to five days, it involves months of hard work to mold it in to the way it turns out. Simrock shared that he used to work on six-ten looks per day and put together look books to discuss and dish out to the proper designers during fittings.

Having worked on over three shows a day, Simrock listed the factors that helped him zeroing down on particular looks, explaining, “I will take into consideration the actual collection, the sensibility of the designer, the textures and the fabrics. They could have very specific references also to help you come up with a look that suits them, that’s in tune with the season.”

He further explained that the makeup trends in India are at par with those in the West as the makeup experts are thorough in their research, noting, “I spend a lot of time before that reviewing everything that’s happened in the season throughout the West in Europe. So that I can generalize those trends and then make trends that work for India within those worlds.”

Given that each model has a different skin tone and texture, it’s of paramount importance that the makeup for a particular show must be an integrated outcome despite of the diversity. “It’s something that’s changed over the years. Now it’s more of a practical method where you look for colors that suit the skin tone to create the look rather than just using one color on every single person,” he said. 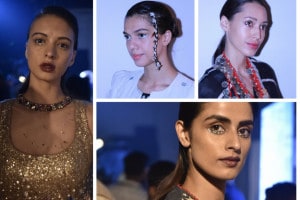 “That won’t work- too much of a variance and it’s not going to look nice. When I’m explaining a look to somebody so I’ll say we’re getting this flushed cheek but you’ve to take into consideration that model’s skin color to create that look. So don’t just use pink on every girl. That’s how we do now,” he explained.

As models swing in and out of backstage, it hits you that it’s as much a challenge for the makeup artist to bring in variety as it is for the models to pull off disparate looks with equal ease and comfort. “The makeup artists play a major role in easing us out as they make sure that the second show, the make-up is closer to the previous one. And if not, then you’ve to remove the whole base and do the prepping part once again and put the base,” said supermodel Alesia Raut.

“So it’s a little bit painful sometimes but it’s worth because you end up looking different every time. It’s part of our work so we can’t complain about it,” she said while talking abouth the 'wake up and make up' mantra.

Another model, Sucheta Sharma James, shared that too much of external makeup products do take a toll on their skin sometimes. “We wear makeup for more than 12 hours sometimes so it’s not good for our skin. So what we do is we drink a lot of water, we have fresh fruits and we clean our skin properly. And it’s not only on the days of the work we’re doing but it is how we take care of our skin. It has more to do with your internal system- if you eat clean, your skin will look better,” she noted.

Simrock, too, credited models for being accommodating and making their work a lot stress-free. “Sometimes there are models who are allergic to products- like they’ll say I have an allergic reaction to argon oil but that’s pretty much it. There aren’t that many specific requests from models, they are pretty accommodating. That’s what they do for a living. So, they are used to experimenting and having different types of products presented to them on daily basis. So that makes it easier,” he said.