Varun Dhawan took to Instagram stories and shared a photograph, where he can be seen wearing a dark 'ganji' and revealing a scar on his shoulder.

Bollywood actor Varun Dhawan shared a selfie from his workout schedule. Varun took to Instagram Stories and shared a photograph where he is wearing a dark 'ganji' and revealing a scar on his shoulder. "Scar tissue training," Varun captioned the image. 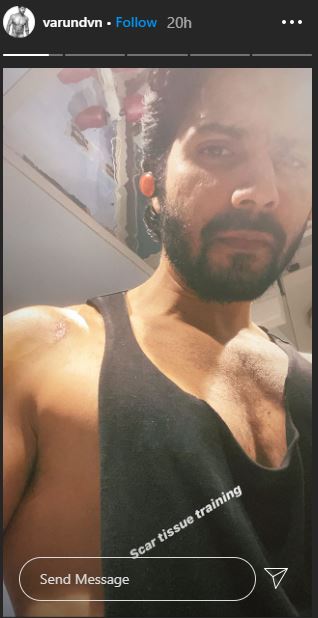 He will soon be seen sharing screen space with Sara Ali Khan in the remake of 1995 hit film Coolie No. 1. The new version is directed by his father David Dhawan, who had earlier helmed the original film of the same name, starring Govinda and Karisma Kapoor.

Varun on Thursday shared the poster of his forthcoming film, where his character is seen wearing a mask.

Another fan expressed: "Lagta hai sari film mask pehen ke hogi" (I think you will be wearing that mask throughout the film.)

Many fans were curious to know if the film would be releasing in the theatres or on OTT.

The film was originally slated to hit theatres on May 1 but the release got stalled owing to the outbreak of coronavirus.