The couple -- Ranveer Singh and Deepika Padukone -- will reportedly tie the knot in Italy later this year.

The couple -- Ranveer Singh and Deepika Padukone -- will reportedly tie the knot in Italy later this year.

Even though Deepika Padukone and Ranveer Singh have never officially admitted being in a relationship, recent videos of the duo holidaying in the US and their 'hand-in-hand' appearance at the Mumbai airport thereafter, speaks volumes. In fact, their on and off PDA on social media too gives an idea of what is brewing between the two.

Their cute yet naughty comments, one-liners expressing love for each other, use of emoticons like kisses and hearts and careful yet sometimes cheesy use of words on each others social media posts, not shying away from showcasing the bond they share, is something that their fans love about the two.

Recently, Deepika asked Ranveer a question which millions of his fans from across the globe have been meaning to ask him for the longest time.

In a recent photograph shared by Ranveer on his Instagram account, where the actor can be seen sporting a blue sweatshirt and cream track pants, the actress commented "why so hawt!?!?!" to which Ranveer replied, "@deepikapadukone hey now ..." 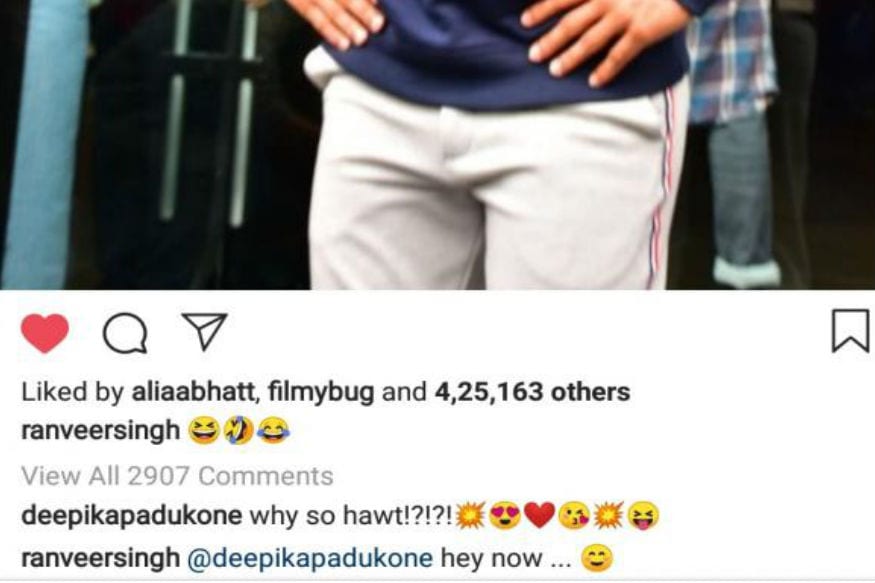 Earlier, Ranveer had shared a picture wearing an ink-blue suit and captioned it, “Monday Blues?”. And among the thousands of fans who commented on his post appreciating the look, was an ardent admirer -- Deepika Padukone, who rushed in to comment on the photograph. The couple, who met on the sets of their first film together Goliyon Ki Rasleela Ram-Leela, hit off instantly and have been rumoured to be in a relationship ever since. There are reports that the two will tie the knot in a stunning Italian location later this year.