102 Not Out Review LIVE: Will Amitabh Bachchan-Rishi Kapoor's Film Win The Day?

It was in films like Amar Akbar Anthony, Ajooba, Naseeb and Kabhi Kabhie among others, that Amitabh Bachchan and Rishi Kapoor established a shared powerful camaraderie onscreen and now it's in 2018, that the two are uniting after a gap of almost 27 years in Umesh Shukla’s 102 Not Out. The director, who has previously helmed OMG- Oh My God!, brings the duo as onscreen father and son. Billed as the most unusual father-son story, the film is based on playwright Saumya Joshi’s popular Gujarati play of the same name and it remains to be seen if its adaptation is as heartwarming.

Given that the thespians have rightfully reinvented their second innings with nuanced performances and sartorial choices, it’ll be interesting to see if their partnership wins the day. Catch the live updates here:
12:57 (IST)

Thumbs up to Amitabh Bachchan and Rishi Kapoor's camaraderie.

Both #AmitabhBachchan and #RishiKapoor continue to reinvent in their second innings. They only get better with time. #102NotOut

#102NotOut is a simplified simple take on a father-son relationship. A part of the angle is fresh, a part of it is all too known.

#102NotOut, despite being a one dimensional take on family relationships, warms the cockles of your heart in most of its scenes.

Big B also turned a composer for 102 Not Out. The song titled Badumba has been composed and sung by him. The lyrics are given by Amitabh Bhattacharya. The song also features Rishi Kapoor who has also lend his voice in the song.

Having helmed Oh My God!, Umesh Batra’s slice of life style continues in this one too. There are moments that will remind you of your own family- parents and grandparents. #102NotOut

It’s half time! #102NotOut is so far a heart-warming unusual father-son tale. Even though the Gujarati accent wavers a bit, the emotions keep you invested.

#RishiKapoor’s 75-year-old Babulal might be “thakela, pakela, boring” but is as cute as a teddy. You feel for him and you feel with him. #102NotOut

That's some will to live!

The energy of #AmitabhBachchan’s 102-year-old Dattatraya is infectious. He wants to live the longest and leaves the viewers wishing for the same. #102NotOut

102 Not Out is also releasing in Russia. Rishi Kapoor took to Twitter to announce the news.

Our film releases in Russia on 4th of May 2018 also. Enjoy! pic.twitter.com/Ywp70UHReH

On working with Rishi Kapoor again, Big B has said, "Teaming up with Chintuji after so many years... after so many successful, historic films, has been the greatest joy during '102 Not Out'... A novel story, competent direction and a most qualified crew, has made the experience even greater,"

When we narrated the idea to both of them, they said okay to the script within 10 minutes. Once they knew the essence is so good, beautiful and playful, also with a lot of depth and emotions, they liked it all," the director of the film, Umesh Shukla said in an interview. 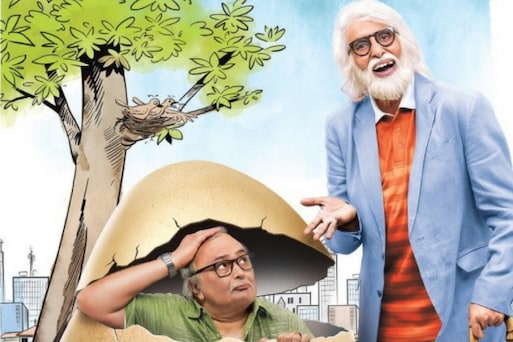 Billed as the most unusual father-son story,

Big B plays a 102-year-old man and a father to the 75-year-old Rishi Kapoor's character. While Big B's character is full of life and a zest to break the record of the oldest man alive, Rishi's character is dull and more practical or so it seems.

The two veteran actors were last seen together in 'Ajooba'. A popular jodi in the late 70s, Big B and Kapoor starred together in films like Amar Akbar Anthony,Naseeb and Kabhi Kabhie among others. Rishi Kapoor disclosed in his biography that his relationship with Amitabh Bachchan had its ups and downs. However, the speculation about a major rift between the two was put to rest when the film was announced.

102 Not Out depicts a father-son relationship where Amitabh Bachchan plays the role of a 102-year-old man and Rishi Kapoor, his son. The film has an interesting tagline "Baap COOL beta OLD SCHOOL!", that explains the relationship of the two in the film.

Amitabh Bachchan and Rishi Kapoor are making a comeback after 27 years with Umesh Shukla's latest film 102 Not Out. The comedy-drama is based on the eponymous Gujarati play written by Saumya Joshi.