20 Years Of 'The Matrix': 5 Times Bollywood Got Inspired By It

Bollywood has not shied away from borrowing pop culture references from Hollywood. As The Wachowskis' 'The Matrix' completes 20 years, we take a look at 5 scenes that took inspiration from the iconic action film.

It has been two decades since The Wachowskis (Lilly and Lana) redefined films with their distinct vision and slick and innovative action sequences that makes for The Matrix (1999).

The green-toned, dystopian, futuristic, sci-fi film is a timeless classic, and ever since the first installment came out, on this day 20 years ago, the landscape of world cinema has dared not to remain the tedious same. Be it The Matrix's philosophy, its costumes, concept, characters, cinematography, VFX, design, dialogues or style, it has remained a fulcrum of popular discussion and a treasured template for all-things-action.

Taking cue from the legend of The Matrix, Bollywood, too, has tried its hand at recreating some of the iconic scenes from the movie that, put simply, heralded a new era of filmmaking. It would be kind to term these rip-offs a tribute and not a second-grade copy, as no movie since, or can ever create such a lustrous impact on cinegoers.

Bending over backwards in motion pictures went unwitnessed till the time The Matrix was realised. Neo did it quite unlike anyone and dodged bullets in a never-seen-before and bewildering way. The enemy itself was quite shocked when he pulled it off with such finesse; and that's justified.

Shah Rukh Khan did not shy away from being the centre of the this tribute in Main Hoon Na, when he dodges oncoming spit from Satish Shah's character in Farah Khan's action-drama film.

The Matrix Reloaded (2003) has a scene where Neo (Keanu Reeves) is overpowered by the enemy that pounce on him from all sides. He is enveloped, and with no back-up we are forced to believe that it is a lost cause. What happens next is unspeakably remarkable. Neo channels his force, closes his fist and applies a upward thrust. The daunting agents are sent flying into the air.

Sajid Khan's Heyy Babyy replicates this scene, with Riteish Deshmukh at the centre of trouble and small kids as the cause of it.

In The Matrix (1999), while fighting Agents in the underground, Neo looks at oncoming bullets, utters an unassuming 'no' and the heavy gunfire just stops mid-air and fall at his humble feet. This scene was crucial to the film as it marked Neo's coming into his own and becoming the One.

In Om Shanti Om's similarly choreographed instance, Akshay Kumar is facing fire from three enemies, who are like the Agents from the original scene. They take aim and fire at him but to no consequence, since he is the Khiladi.

When Neo and Trinity (Carrie-Anne Moss) enter the office lobby to save Morpheus (Laurence Fishburne) from Agent Smith (Hugo Weaving), they are on a suicide mission. Turns out, they are heavily loaded with armoury and the enemy is taken by surprise. By virtue of stepping up each time, people and Agents die by scores.

In the comedy film Awara Paagal Deewana, Akshay Kumar pulls off a Neo, in a similar costume and shades. Better still, he does stunts of both his counterparts from the original film.

The Matrix Trilogy trains the spotlight on women at the centre of hardcore action. From Carrie-Anne taking on the bad guys in all three parts, to Jada Pinkett Smith (Niobe) joining the fight in the last two, the film breaks ground in a genre that hitherto considered high intensity chases, shooting and killing a prerogative of male actors. In The Matrix Reloaded, Trinity, while riding a super bike, saves the significant Keymaker (Randall Duk Kim).

In a thematically similar, yet tonally and contextually dissimilar, scene in Rab Ne Bana Di Jodi, Anushka Sharma plays the saving grace, while a scared Shah Rukh rides the pillion. 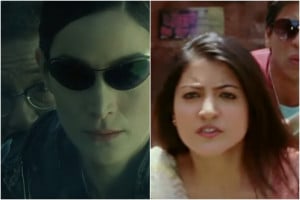 The Matrix Trilogy screams of high production value, and is a VFX heavy film. Yet, nowhere does it compromise on quality storytelling, is thickly layered and pretty intense. For a film that takes its action too seriously, it can certainly be termed as one of the most unique film series of all time.