Samantha may have found a new side to her through ‘A Aa’. However, Trivikram’s ‘A Aa’ is somewhere between “Okay and Uh, Okay” only.

Our movies are usually made from the point of view of the male star. And when a story travels along with a female star, we think that the makers have done an awesome job. It’s not that big a deal actually. It’s just another way of “telling”. Sekhar Kammula’s ‘Anand’ starts off with a girl’s introduction (young Roopa jokes around with her family members). The movie takes its own time to paint the pains and happiness of the couple (Kamalinee Mukherjee and Raja). The laughs and cries in ‘Anand’s’ romantic platform feel genuine, whereas ‘A Aa’ feels like an improv play gone wrong.

In ‘A Aa’, and in ‘Anand’, there’s a death in the family that plays a nasty role in separating the leading actors’ families, and in bringing them back together. Trivikram’s films are built on the death of his characters. Mahesh Babu goes to Nasser’s house as Pardhu in ‘Athadu’ (because Rajiv Kanakala is shot dead). Pawan Kalyan loses his parents in ‘Jalsa’, and his mother in ‘Attarintiki Daredi’. The fathers of the male leads in ‘S/O Satyamurthy’, and in ‘A Aa’ are seen more via flashbacks (in case you’re still wondering: the fathers die, too). Do you see a pattern? There’s more. Trivikram’s characters go out of this manmade world either due to accident or poverty (also another name for suicide). Natural death doesn’t seem to fascinate the filmmaker. Anasuya Ramalingam (Samantha) has a bucket load of expressions. There’s a sad Samantha, a happy Samantha, a curious Samantha, a nervous Samantha, a funny Samantha, a stupid Samantha, and so on. Likewise there are some expressions packed in her face that make us chuckle. Anasuya’s dear dad (Naresh) calls her “kukkapilla”. Did Trivikram give Samantha’s character that name after observing her actions or did Samantha observe a puppy’s behavior for real? As far as getting a puppy’s face right, Samantha has done a wonderful job. Nithiin, as a hurt young man, looks neat in his role.

Samantha, daughter of a rich businesswoman and an advocate, goes to Nithiin’s village to learn about herself. She has previously failed in making a mark in the fields of music, dance, acting, and business. When her mother (Nadhiya) questions her, Naresh in a supportive tone tells his wife that she’ll make a good wife. She doesn’t learn the basics of how to become a good wife in a village. She realizes that there’s life outside her bungalow. And that’s probably enough for her to make decisions on her own. But a protective mother like Nadhiya won’t allow that to happen. She wants the best to go to her daughter.

Nithiin stays true to his character-brief. He looks empty-hearted when he’s sad, and when he gets mad, you don’t to want to be near him (he’ll break the doors of your car). Many unnecessary portions steal the thunder of ‘A Aa’. Why should the climax have an action scene? Yes. It is enjoyable to an extent. Still, it doesn’t make any sense. The same goes for the songs. Mickey J Meyer’s music is colorful like Samantha’s puppy-face. Yet they are not required. “Yellipoke Shyamala” is great as a standalone track but what is it doing in the film? 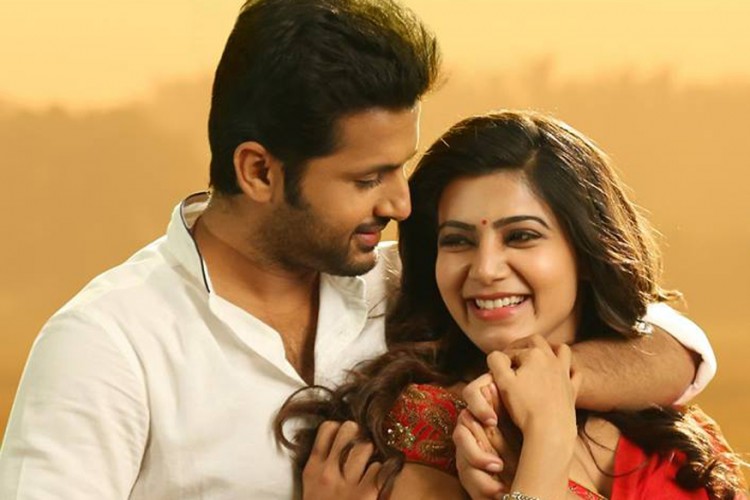 The romantic comedy tilts toward comedy. Even then, the situations provided for comedy are not up to the mark. Hari Teja and Praveen bring the roof partially down with their one-liners. That’s the problem. The roofs don’t fall down like they did in ‘Bhale Bhale Magadivoy’ (a rom-com that mixes both the elements well).

Rao Ramesh does a great job again. His dialogue delivery is perfect. If he says an ugly line, he’s a bad man, and if he says a funny line, he’s a comedian. Everybody can’t do that. Nagavalli (Anupama Parameshwaran) is a grey-brained girl. A four-year-old kid is hiding in her soul. I couldn’t take her slyness seriously. The methods she uses to get close to Nithiin are not popular; they are stale. So, the reasons to dislike Nagavalli are inadequate.

Samantha may have found a new side to her through ‘A Aa’. However, Trivikram’s ‘A Aa’ is somewhere between “Okay and Uh, Okay” only.