'Log sapne dekhte hai but kitno ke sapne poore hote hai behind the bars, it is a dream come true moment for the jail inmates.'

“The test of fire makes fine steel,” says Celina, a 22-year-old former Tihar jail inmate, who now takes pride in being referred to as a fashion designer in her circle. Having been in prison for over 3 years, Celina shares that her family had cut all contact with her. But now that she’s made a place and a likely future for herself, she doesn’t wish to rekindle old ties. “When a kid passes with flying colours or achieves a feat, their family is right there by their side. But when something unfortunate happens, the family and society is quick to point fingers.”

“When I needed my family the most, they weren’t there for me and now they want to talk to me. But now, I have come a long way,” she says while talking about her designing endeavor.

While she has always been fond of sketching, the training has helped her improve her stitching among other details. “I have no regrets but only opportunities that I made the most of during my time in Tihar. I completed my education and learnt new skills. I always wanted to be a model and now I am that and even have a degree in fashion,” she adds.

Another former inmate, Janki, who is accompanied by her 24-year-old son Anil, is proud of herself and makes no bones in admitting that she was only a house-maker before her prison time but now runs a home boutique. “I was initially upset but then I thought there’s no point fighting destiny. I started working in the silai centre and in fashion lab where I learnt drawing and stitching.”

She bursts into laughter when asked about her time in prison and says she only had good things to imbibe during her term. “There’s no age barrier to learning. One can learn anything at any age provided one is confident of themselves. Apne upar bharosa hona chaiye. Apne pe bharosa nahi hai toh sab jagah hi galat hai, chaahe Tihar ho ya bahar ho.”

These two are among the few volunteer inmates who will be designing costumes for an upcoming Bollywood film Marksheet. The film, being directed by Harish Vyas, brings to the fore several aspects of crime in education and its impact on the society. But the idea of collaborating with real-life prisoners came to the lead actor Imran Zahid when he witnessed a fashion show featuring garments designed by the inmates in the capital. An avid student of Mahesh Bhatt, Zahid is of the view that every novel change in the film industry will be brought about by newcomers. “If any development takes place in the field of Bollywood and Cricket, the fields are such that they will immediately attract attention. The people in jail are the ones whose crimes have been caught or certain unfavorable situations have led them to this side of the law. Har koi criminal thodi na hota hai,” he says adding that the inmates are perhaps more honest than the ones plagiarizing in the film industry. 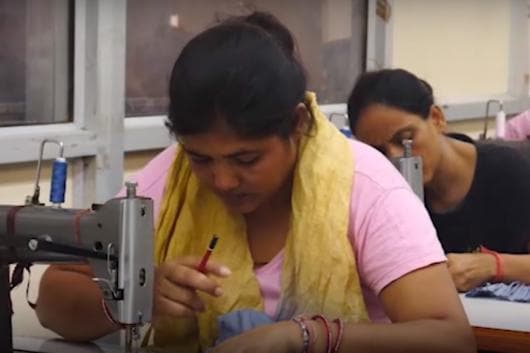 “Even if someone talks about cinema hundreds of years later, the work of jail inmates as costume designers in Marksheet will come up. It will be ingrained in the history,” he says.

Dinesh Gautam, who has co-written the film along with Monazir Alam and Sachin Kumar Ladia, seconds Zahid saying that a collaboration like this is a trendsetter in more ways than one. “I feel it’s about breaking the jinx. It is about taking that first step. The inmates having a sense of association with a Bollywood film will help them in reforming themselves. That is what the bottom-line of the jail is- to help a person, who has a criminal bent of mind, to rejoin the society with a reformed approach.”

He says that while he had certain notions before visiting the prison, his visit transformed his thoughts. “The people who are viewed and perceived to be behind the bars are basically the ones who have had the courage to accept their deeds. There are many who are roaming outside the bars and it’s just a matter of chance that they have not been caught.”

In February 2017, a fashion lab, equipped with pattern-making tools and sewing kits, was set up in Jail number 6 for women inmates acquainted with the art in association with a fashion institute Pearl Academy. Through a series of workshops, the inmates were taught the art of designing clothes with an improved understanding of aesthetics and the science of fashion. Cut to 2018, the inmates are skilled enough to design costumes under the mentorship of designer Winky Singh of the label Ministry Of Design - Winky Singh and Rashima Singh.

“They all have an artist in them, we just need to bring the talent out by putting this effort. Not that everybody is good in one thing, some of them get excited when you talk about stitching, and some get excited about embroidery with them,” she shares.

To make sure that the inmates are on the same page, Singh often cross-questions them as an attempt of brainstorming. “I try to prepare something every time. I want to make sure they are in it and understand the ideation and characterization of the film. It’s not that they do one film and it’s finished. When they pick up the next project, their mind should be trained enough.”

She admits that while she was a little apprehensive when she took up the project, she is now proud of its results. “When they will see their names in the credits, it’ll be a very exciting moment for the entire team. Log sapne dekhte hai but kitno ke sapne poore hote hai behind the bars, so I think this is a dream come true moment for them.” Miss Teen Universe Shrishti Kaur and model turned actor Kulnoor Brar are both making their Bollywood debut in Marksheet and are elated at the idea of giving back to society in a way as creative as this. Having worked with designers like Tarun Tahiliani and Ritu Kumar, Brar holds the fort for the inmates and is all praises for their work. “I wore their outfits, I looked at their faces, they were so happy. And the stitching was so fine and the design as good as any other label. I could flaunt it just as I flaunt the other designers,” she enthuses.

With two batches of 35 and 18 inmates respectively already complete, Superintendent Rose Rai states that the idea of prison authorities is to empower women by not just making them emotionally stable but also financially independent. “Women empowerment without financial empowerment is not so effective, so the prison authorities are focusing on that. Once they go outside the jail, they should have something with them which helps them to be financially stable," says the superintendent.

On the idea of them collaborating with a Bollywood project, Rose is as excited as the inmates and says, “Fashion is not only about dress for some people is a career and a way how to feed their family. It serves us two purposes- first rehabilitation and secondly, a lot of tension is reduced. They know they will have something with them to help them earn money post their term.”

According to Ajay Kashyap, Director General of Tihar Jail, the major part of mental isolation and trauma faced by the inmates is comprehensively addressed if the skills being taught to them are economically viable and add to their life skills. Kashyap also feels that a female inmate, once released, faces the dual stigma of being abandoned by her family and friends in addition to the societal prejudice.

Adding to the ideology of reformation, rehabilitation, and reintegration, Kashyap explains, “As a society, we need to reach out and give second chances to people who are being released from the jail- something more than sympathy is needed and some proactive engagement is needed. If not sympathetic- empathetic, so that they can pick up the pieces of their life and make a life for themselves.”