Adipurush Teaser Launch LIVE Updates: Netizens are unimpressed by the 'cartoon-ish' VFX of Prabhas-starrer. Adipurush will be released on January 12, 2023.

Adipurush Teaser LIVE Updates: The teaser of Telugu superstar Prabhas’ most-awaited film Adipurush is finally out and it has received mixed reactions on social media, with a section of the internet dubbing the VFX of the film as “cartoon-ish” and “disappointing”. The teaser of Om Raut’s directorial was officially unveiled in Ayodhya, Uttar Pradesh, at a mega event in the presence of Read More

Adipurush teaser live updates: What's the story of the film?

According to the makers of Adipurush, the film is based on the epic Ramayana with Prabhas and Saif Ali Khan playing the lead roles. Directed by Om Raut, the film also has Kriti Sanon playing Sita, while Sunny Singh plays Lakshman. Adipurush is scheduled to release on January 12, 2023.

Prabhas donned an all-white kurta pajama for the teaser launch event of Adipurush in Ayodhya, Uttar Pradesh. The actor looked dapper as always.

Here are some photos of Adipurush team including Prabhas, Kriti Sanon, Bhushan Kumar and Om Raut from the teaser launch in Ayodhya

The teaser of Prabhas, Saif Ali Khan and Kriti Sanon starrer Adipurush was released at a mega event in Ayodhya on Sunday. However, it has left netizens disappointed and upset. Om Raut’s directorial, which will present Prabhas and Saif as Lord Ram and Ravana, is now getting trolled on social media for its ‘poor VFX’ and Saif Ali Khan’s look as Ravana. Read the full story, here.

After a long wait, the much-anticipated teaser of Adipurush was launched in five languages including Hindi, Tamil, Telugu, Malayalam and Kannada in the holy land of Lord Ram, Ayodhya, Uttar Pradesh. Prabhas, Kriti Sanon, Om Raut, and producer Bhushan Kumar graced the launch.

After a long wait, the much-anticipated teaser of Adipurush was launched in five languages including Hindi, Tamil, Telugu, Malayalam and Kannada in the holy land of Lord Ram, Ayodhya, Uttar Pradesh. Prabhas, Kriti Sanon, Om Raut, and producer Bhushan Kumar graced the launch.

Prabhas, Kriti Sanon, Om Raut and producer Bhushan Kumar launched the 50-feet tall poster of Adipurush making it a grand experience that one can never forget.

Adipurush teaser live updates: What is the budget of Om Raut directorial?

Adipurush, starring Prabhas, Kriti Sanon and Saif Ali Khan, is said to be made on a budget of Rs 500 crores. The film is directed by Om Raut.

Netizens have called out Adipurush makers for depicting Saif Ali Khan’s portrayal of Ravana as Khilji in the teaser. One user wrote, “Who the hell in seven world would call him ravana? I even deny to call him Saif Ali Khan.” Another one said, “Raavan was one of the biggest Shiv bhakt. Saif Ali Khan with bare fore head looks more like a Mohammed Khilji than Ravana.”

Hashtag ‘Disappointing Adipurish’ trends on Twitter as netizens call out the ‘bad’ VFX of Prabhas starrer. One user wrote: “I was wrong about #Adipurush, we can’t do justice to stories like #Ramayana & #Mahabharata unless we have a budget of 1000+ crores. #Adipurush looks promising but I am #disappointed with the VFX and CGI. Instead of Prabhas’s hefty fees, makers could have invested that money in VFX.”

I was wrong about #Adipurush, we can't do justice to stories like #Ramayana & #Mahabharata unless we have a budget of 1000+ crores. #Adipurush looks promising but I am #disappointed with the VFX & CGI. Instead of Prabhas's hefty fees, makers could have invested that money in VFX. pic.twitter.com/1s6gCb9Phh

Singer Stebin Ben, who is reportedly dating Kriti Sanon’s sister, Nupur Sanon, is all praise for Adipurush teaser. Taking to his Instagram story, Stebin wrote: “What a teaser! Literally goosebumps. Can’t wait to watch it on big screens. Best wishes to the entire team!” Kriti Sanon’s sister, Nupur Sanon, gave a shout-out to the Bollywood actress after the teaser of Adipurush was released. Kriti is playing the role of Sita in the Prabhas starrer. Sharing the teaser of the movie on her Instagram Story, Nupur called it the “biggest”. 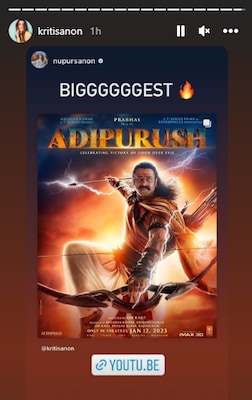 Bollywood actress Kareena Kapoor Khan is all hearts for the teaser of Adipurush, starring Prabhas, Saif Ali Khan and Kriti Sanon. In the film, Saif, who is married to Kareena, is playing the role of Lankesh. 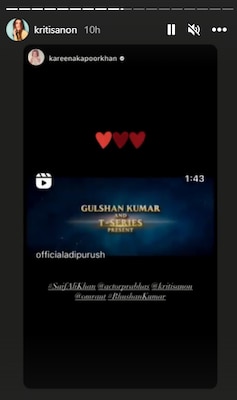 Prabhas opted for an all-white kurta pajama for the teaser launch event of Adipurush in Ayodhya, Uttar Pradesh. The actor looked dapper as always.

Director Om Raut took to Twitter to share the teaser of Adipurush. He tweeted: “Step into the word of Adipurush #AdipurushInAyodhya.”

Adipurush teaser live updates: I was frightened about this role, says Prabhas

At the teaser launch of Adipurush, Prabhas revealed that he was a scared about doing the role of Lord Ram in Om Raut’s directorial. “I was really frightened about the role. We have done this film with a lot of love and dedication,” Prabhas said. 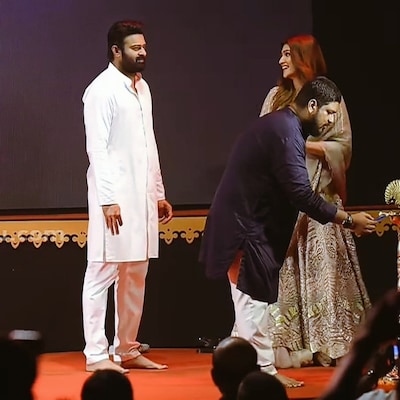 Hashtag ‘cartoon’ trends big on Twitter as netizens mock the VFX of director Om Raut’s Adipurush. One user wrote: “Tell me this isn’t a Cartoon movie?” Another user requested Om Raut to not release the film with the current graphics. “Half the #Adhipurush teaser looks very gamish. Please upgrade the graphics multifold,” the user added.

Very much disappointed for #Adipurushteaser 😢

Tell me this Isn't a Cartoon movie 🥲#AdipurushTeaserDay #Prabhas pic.twitter.com/yRbZL7cs6g

Mr @omraut please don't release the movie with this kind of graphics. It's worst than ever. Half the #Adhipurush teaser looks very gamish. Please upgrade the graphics multifold. #Adhipurush #Adhipurushteaser #cartoon

The makers of Adipurush had planned a mega event in the birthplace of Lord Ram to mark the beginning of the film’s promotions. Earlier this week, Prabhas shared his first look as Lord Ram from the multilingual period saga. Adipurush is a big-screen adaptation of the Hindu epic Ramayana. In the first look poster, Prabhas, dressed as Lord Ram, is seen aiming his arrow at the sky as lightning strikes and thundering waves splash the shore.

Earlier in an exclusive interview with News18 Showsha, Kriti Sanon had opened up about being part of a massive movie like Adipurush. When asked if she was wary of controversy given the film’s sensitive subject, she said, “I am aware of the responsibility that comes with this character. As far as trolls are concerned what I say personally matters and I am cautious about that. I am conscious about the words that I choose and that has happened because of the time that we are living in. Everything that we say becomes a big deal. But I know the character and the story that we are telling and I have a lot of respect for it and it is going to reflect in what I am going to do.”​