Varun Dhawan took to Instagram to share a hashtag "CBI for SSR," initiated by Sushant Singh Rajput's sister Shweta Singh Kirti on social media. The hashtag was accompanied by a folded hands emoji.

Varun Dhawan on Thursday came out in support of Sushant Singh Rajput's family as he demanded a Central Bureau Investigation (CBI) inquiry into the death of the actor.

Varun took to Instagram to share a hashtag "CBI for SSR," initiated by Sushant's sister Shweta Singh Kirti on social media. The hashtag was accompanied by a folded hands emoji. 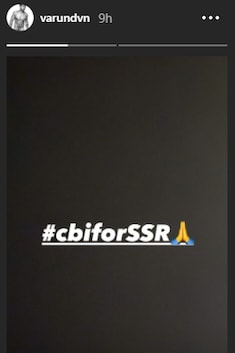 At the time of Sushant's passing away, Varun had shared a throwback picture of him with the late actor, alongside an emotional caption.

"RIP Sushant. Sushant was a true artist. Supremely passionate and hardworking. I have lovely memories of the time we spent. I’m very shocked at this moment. Sending my deepest condolences to his fans and family," he wrote.

This comes after Varun's Dilwale co-star Kriti Sanon demanded a CBI inquiry into the death of Sushant Singh Rajput.

Sanon took to Instagram stories and penned down a note stating that she hopes that CBI takes over the case so that it gets investigated "without any political agendas."

"I pray that the Truth comes out SOON..,, His family, his friends, fans, and all loved ones deserve this closure," she wrote.

"I hope and pray that the CBI takes over the case so it''s investigated without any political agendas, in the TRUE sense, to provide justice to the family!! Its high time his soul rests in peace! ,, #CBIForSER #SushantSinghRajput," she added.

Ankita Lokhande, too, shared a video message on Instagram in this regard.

"The nation wants to know what happened with Sushant Singh Rajput. Justice for Sushant, CBI for SSR," said Ankita in the video message.

Actress Daisy Shah also took to Instagram to demand justice for Sushant. "It's almost two months since Sushant's untimely demise. It's not easy.... as if the pain of losing a son isn't enough for the family that they have to go through so much emotional trauma. It's time #CBI takes up the case and give justice to Sushant and his loved ones. #CBIForSSR"

Earlier on Thursday, actor Kangana Ranaut had also demanded a CBI inquiry in the case by putting out a video message of herself.