Alaya F Shares Her Journey of Contracting Covid-19, and Then Recovering

Bollywood actress Alaya F has revealed that she tested positive for COVID-19 in the last week of December 2021.

Bollywood actress Alaya F has revealed that she tested positive for COVID-19 in the last week of December 2021. The 24-year-old, fortunately, tested negative upon testing for a second time, and the consequent test was also negative. Alaya took to Instagram Stories to share a note detailing how she had tested positive for the virus a week ago but later tested negative twice.

Informing her followers about the COVID-19 test results, the actress wrote that “Hi Everyone! I had tested positive for COVID-19 a week ago, I had no symptoms and nobody around me had any symptoms. I tested because I was supposed to be travelling.” Alaya further shared that she had isolated herself and did not develop any symptoms. She then revealed that as a precautionary measure, she decided to get tested again on December 30 which turned out to be negative. Alaya did her third COVID-19 test on January 1 and again tested negative, allaying her fears of being infected. 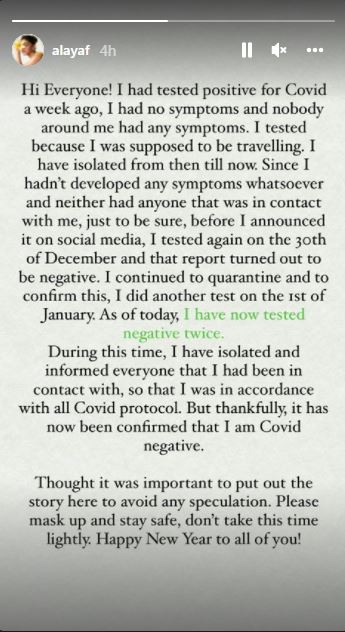 Further in her note, Alaya felt thankful for being safe and stated that she had informed everyone who had been in contact with her. “I was in accordance with all COVID-19 protocols,” she added.

Wishing her fans a happy new year, Alaya also encouraged everyone to mask up and follow COVID-19 protocols.

From Kareena Kapoor Khan, Akshay Kumar to even Amitabh Bachchan, the dreadful virus did not spare anyone. On Monday, Bollywood actor John Abraham and his wife Priya Runchal also tested positive, and are reportedly under home quarantine. Earlier, a private party hosted by director Karan Johar at his residence had led to actresses Amrita Arora and Kareena Kapoor Khan testing positive for the virus. The party which was organised to mark the 20 years of 'Kabhi Khushi Kabhie Gham' was also attended by other stars including Arjun Kapoor, Malaika Arora and Karisma Kapoor.