Bollywood stars Alia Bhatt, Anushka Sharma, Disha Patani among others took to Instagram to demand justice for a nine-year old Labrador Bruno, who was killed by three men in Kerala.

A recent report that claims that a Labrador dog was brutally killed by three men in Kerala have horrified many. The dog, who was named Bruno had reportedly gone out to play on the beach where three men beat him up and threw him into the sea. Along with the rest of the nation, many Bollywood celebrities have raised their voice against animal cruelty and demanded harsh punishment for Bruno’s killers.

Indian paparazzo Viral Bhayani first shared the news by posting a picture of Bruno along with text that read, “A Labrador named Bruno of Mr. Christuraj is brutally killed by 3 persons. Bruno daily used to play in beach. On that day after playing he rested near a boat. From there 3 persons brutally killed Bruno by beating him using stick and Bruno was hanged in fish hook alive (sic)."

He captioned the post, “A nine year old Labrador Bruno was beaten to death and was thrown into the sea by three men in Kerala."

After that, many celebrities including Alia Bhatt, Anushka Sharma, Tiger Shroff, Disha Patani and Jacqueline Fernandez were took to Instagram to demand justice for Bruno and harsh punishment for his killers.

Alia took to Instagram stories and wrote, “Disgusting! They cannot get away with this! Until they are punished people with this twisted mindset are not going to change." 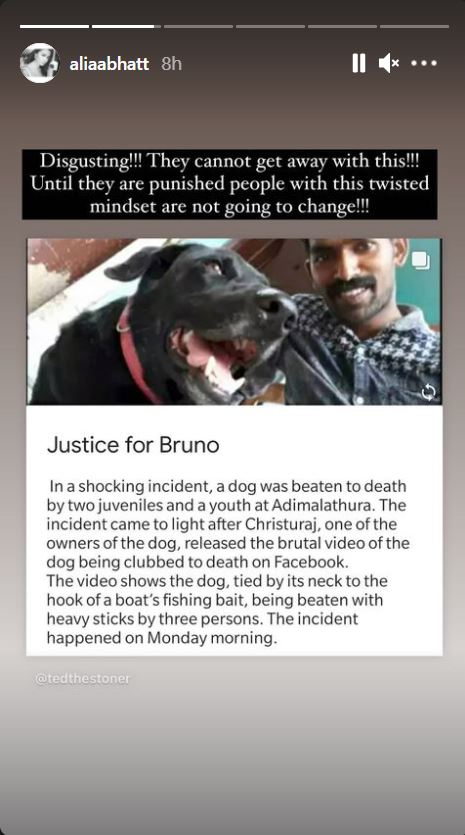 Anushka, on the other hand, wrote, “Monsters (sic)" on her Instagram stories. Disha, on the other hand wrote, “Hope the culprits are found and severely punished. #JusticeforBruno." In another story, Disha wrote, “Stop animal cruelty. Every animal on the planet deserves to be loved and treated well." Jacqueline also shared multiple stories related to Bruno’s case. She also shared an update where the culprits have apparently been arrested. According to a report in Times of India, Sony P, the sister of Bruno’s owner said that the family was devastated by what happened to Bruno. She said, “He had been with us for eight years. Our kids played with him and he would eat from all our houses. He was family to us. It was recently that he started going to the beach. Usually he would go and return by noon."

She said that police have not taken any action after they filed the complaint. “We came to know that they were burying the matter with the help of one of the relatives employed at coastal police station nearby. We felt we wouldn’t get justice and we took to Facebook so that everyone would know what happened to our Bruno," she further added.