Alia Bhatt Hurts Her Back, Informs Fans by Sharing Pic on Instagram

Alia Bhatt, who is all set to play the famous prostitute Gangubai in Sanjay Leela Bhansali's directorial Gangubai Kathiawadi informed that she suffered a back injury.

It was recently announced that Ali Bhatt will play the famous prostitute Gangubai in Sanjay Leela Bhansali's directorial Gangubai Kathiawadi. The actress, who started shooting in December last year has been constantly sharing updates about the film.

Now, in a new update, Alia informed her fans that she suffered a back injury. Taking to her Instagram story, the actress posted a picture of herself lying in the bed with her cat Eddie. "Selfie time with mommy cause she’s hurt her back and has nothing better to do at 2am. Eddie and mommy (2020)," Alia wrote over the picture. Take a look: 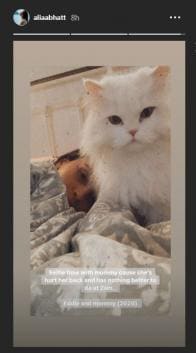 Gangubai Kathiawadi is the story of a real-life character from Hussain Zaidi's book Mafia Queens Of Mumbai. The film, which went on floors on December 27 last year will follow the rise of the real-life person to one of the most respected brothel owners of Mumbai. It is scheduled to release on September 11.

In one image, Alia Bhatt can be seen sitting with her hair plaited and staring with a deadpan stare at the camera. One cannot miss the pistol that is kept next to her. Her look from the film garnered praise from a number of her fellow members of the Bollywood industry like Jacqueline Fernandez, Zoya Akhtar, Dia Mirza, and Anushka Sharma among others.