Many artists from Bollywood fraternity wished Ishaan Khatter on his 24th birthday. Take a look below.

Ananya Panday, who will be seen paired opposite Ishaan for their upcoming film Khaali Peeli, posted a picture of Ishaan, wearing a black t-shirt and holding a "poster" drawn by her that has the name of their upcoming movie written on it. She wrote, “Happy bday to the most annoying person I know." 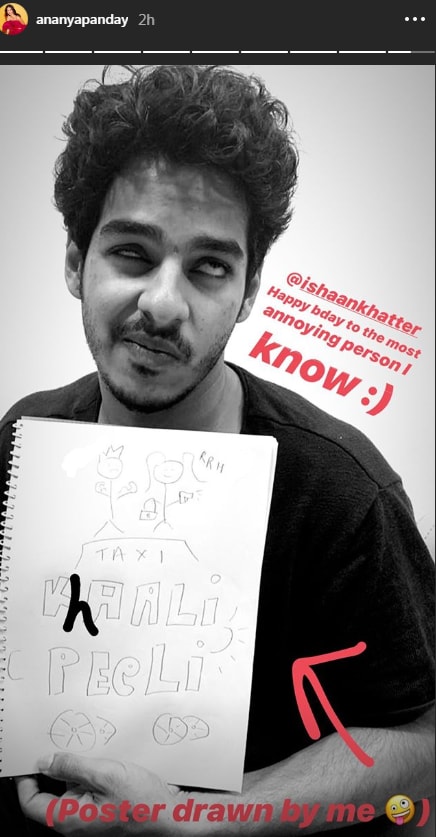 Ishaan’s sister in-law and Shahid Kapoor’s wife, Mira Rajput also took to her Instagram to share pictures of Ishaan and wish him in the most adorable way.

Mira Rajput shared two pictures of Ishaan Khatter on her Instagram story. In one of the pictures shared by Shahid Kapoor's wife Mira, Ishaan is seen dancing wearing red pants with white stripe. She wrote, "Saying Hello to new year like.. @ishaanKhatter".

In another picture shared by Mira, she wrote, "Happy Happy Birthday Not-so-little-brother. Stay crazy, stay mad and keep clicking the best pictures of me."

Alia Bhatt shared a BTS still from her film Udta Punjab, which shows the two of them in a middle of a jungle. Seems like Ishaan was an assistant director in the Anurag Kshyap directorial.

Ishaan made his acting debut in Vaah! Life Ho Toh Aisi! released in 2005. In 2017, Ishaan was seen playing the lead in Majid Majidi's drama Beyond the Clouds. His last film was in 2018 titled Dhadak where he was paired opposite Janhvi Kapoor.