The actress shared a note on Instagram on Tuesday morning to put the rumours to rest, saying that it was an old injury that was causing her discomfort.

Alia Bhatt recently shared a picture of herself and her cat Edward on her Instagram stories. The photo showed an unwell Alia lying in bed with her cat. Her caption spoke of her ailment, "Selfie time with mommy cause she's hurt her back and has nothing better to do at 2am." The post sparked reports that Alia had hurt herself while shooting for Gangubai Kathiawadi.

The actress shared a note on Instagram on Tuesday morning to put the rumours to rest, saying that it was an old injury that was causing her discomfort. 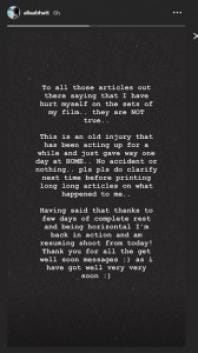 "To all those articles out there saying that I have hurt myself on the sets of my film.. they are NOT true.. This is an old injury that has been acting up for a while and just gave way one day at HOME.. No accident or nothing.. pls pls do clarify next time before printing long long articles on what happened to me.. Having said that thanks to few days of complete rest and being horizontal I'm back in action and am resuming shoot from today! Thank you for all the get well soon messages as i have got well very very soon," she wrote in her note.

When Alia stepped out in Mumbai after informing about her injury, photographers clicked her and found her mood to be somewhat off. Paparazzi Viral Bhayani posted a picture of Alia outside one venue and captioned it as "Alia Bhatt does not seem to be in her regular bubbly spirit today."

Responding to this, Alia reiterated that she has hurt her back and not feeling well. She wrote in the comments section, "I've hurt myself Viral so smiling not coming so easily. But this post has made me smile."