Katrina Kaif shared the teaser of Alia Bhatt's Darlings on her official Instagram handle and wrote: Alooo looking too good.

Alia Bhatt on June 5 dropped the teaser of her much-awaited dark-comedy thriller, ADarlings. Since then, praises have been pouring in for the team from fans and their industry colleagues alike. The latest celebrity to praise the teaser is none other than Katrina Kaif, who also happens to be a good friend of Alai. Darlings stars Alia along with Shefali Shah, Vijay Verma and Roshan Mathew. Katrina shared the teaser on her official Instagram handle and wrote, “Alooo looking too good.”

Alia, too, responded to her story and showered love on her. She reposted it and wrote, “Love you my Katyyy.” 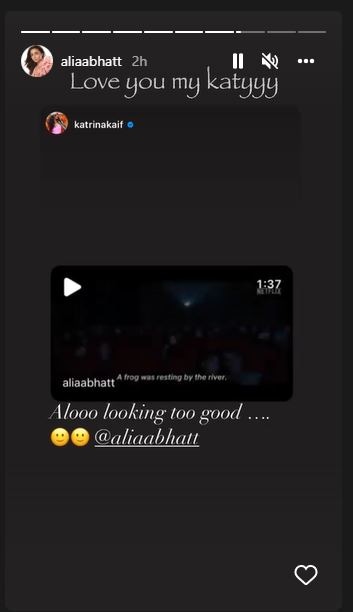 Alia Bhatt and Katrina Kaif maintain a good bond to date. Earlier, it was said that their friendship has suffered after Alia started dating Ranbir Kapoor following his breakup with Katrina. However, the two share a good bond and always show support for each other publicly. Moreover, the two actresses will be seen together for the first time in the film Jee Le Zaraa. The film also stars Priyanka Chopra as one of the leading ladies.

Talking of Darlings, the teaser was released recently and it opened with Alia narrating a tale about a frog and a scorpion while a series of events play out on the screen.

Darlings is Alia’s first home production film. The actress is co-producing the film with Shah Rukh Khan and Gauri Khan’s Red Chillies Entertainment. Directed by Jasmeet K Reen, ‘Darlings’ is billed as a dark comedy that explores the lives of a mother-daughter duo trying to find their place in Mumbai, seeking courage and love in exceptional circumstances while fighting against all odds.

Apart from Darlings, the actress will also be seen in Brahmastra this year, where she will be paired opposite her actor-husband Ranbir Kapoor for the first time. She has also reunited with her Gully Boy co-star Ranveer Singh for Karan Johar’s Rocky Aur Rani Ki Prem Kahani.

Alia Bhatt is also working on her Hollywood debut Heart of Stone.