Allu Arjun was invited to represent the country as grand marshal at the annual India Day parade in New York. (Image: Instagram)

Allu Arjun was honoured as Grand Marshal by NYC Mayor Eric Adams as the actor attended India Day Parade in New York. He also did Pushpa's signature step with Eric.

Telugu Superstar Allu Arjun is one of the much-loved actors in the industry. His film Pushpa: The Rise - Part 1 was a box officer superhit, and earned Rs 300 crore worldwide. The Telugu actor was recently in New York, where he represented India at one of the most well-known annual events organised by the Indian diaspora in the US – the India Day parade. On Monday, the actor took to his social media handles to share pictures from the event. Arjun was honoured as Grand Marshal at the India Day parade by NYC Mayor Eric Adams.

Taking to Instagram, he wrote, “It was a pleasure meeting the Mayor of New York City . Very Sportive Gentleman. Thank You for the Honours Mr. Eric Adams . Thaggede Le ! @ericadamsfornyc."

In the pics, we see Allu Arjun being facilitated with a certificate he stood next to NYC Mayor and other dignitaries at the event. We also catch pictures of an all smiles Arjun as he stood next to mayor while they both perform the viral ‘Main Jhukega Nahi’ move.

Earlier on Sunday, Allu shared glimpse of India Day parade in New York on Instagram. He was also joined by his wife Sneha Reddy at the parade. Sharing a video of himself waving the national flag at the parade, Allu wrote on Instagram Stories, “It was an honour being the grand marshal at the India Day parade in New York.” The actor, who was dressed in white, could be seen waving to fans cheering for and clicking photos of the star,

in the two videos he shared. Sneha was dressed in yellow for the India Day parade as she joined Allu on an open-top vehicle. 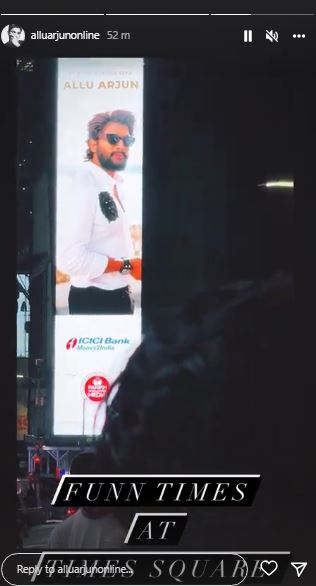 Allu’s fan pages too shared some videos, in which the actor could be seen on LED screens at Times Square, New York. His fans, many of whom were dressed in traditional Indian outfits, cheered for the actor after seeing him on the screens. Earlier on August 19, Allu and Sneha were spotted at New York airport, ahead of the annual India Day parade. He had also taken to Instagram Stories to share a photo from New York. The Federation of Indian Associations of New York, New Jersey and Connecticut had come together celebrate 75 years of India’s Independence.

As fans would know, Allu is prepping for director Sukumar’s Pushpa: The Rule. The movie will reportedly commence filming on Monday.

Pushpa, released in December 2021, was a massive hit not only in the Telugu-speaking states but also in Hindi circuits. The film surpassed Rs 100 crore collections with its Hindi version along.

Director Sukumar is tightlipped about the storyline of Pushpa 2 and its cast. Crew members of the movie suggest that Sukumar has completed the work of the script and storyline. Recently, it was reported that Manoj Bajpayee will likely be part of Pushpa 2. He might perform the role of a cop. However, he denied the claims while speaking with News18 Showsha.

Meanwhile, the team has even decided on the budget of Pushpa, which might cross the Pushpa part one. Part one had a budget of approximately Rs.200 crore. As reported by India Today, the production cost alone of Pushpa: The Rule might be Rs. 200 crore. It is opined that the budget can reach up to Rs.400 crore. Reports suggest that the sequel will hit the theatres next year.