News18» News»Movies»Amitabh Bachchan Is Upset As Bhumi Calls Him 'Baller', Says 'Nobody's Telling Me What It Means'
1-MIN READ

Amitabh Bachchan Is Upset As Bhumi Calls Him 'Baller', Says 'Nobody's Telling Me What It Means'

Amitabh Bachchan took a trip down memory lane as he recalled shooting Kabhie Kabhie in Lucknow, 44 years ago. He shared a collage of a still from the 1976 romance drama and another still from his upcoming release Gulabo Sitabo, which was also shot in Lucknow.

Soon, actress Bhumi Pednekar dropped a comment on his post, which read, "44 years later and still giving us such memorable characters... I’m telling you you’re the most baller person ever."

Big B was quick to reply to Bhumi’s comment, asking her about the meaning of Baller. He wrote, “arre ..Bhumi...what is 'baller'? Kab se pooch rahe hain koi bata hi nahi raha (I have been asking for a long time but nobody is telling me). 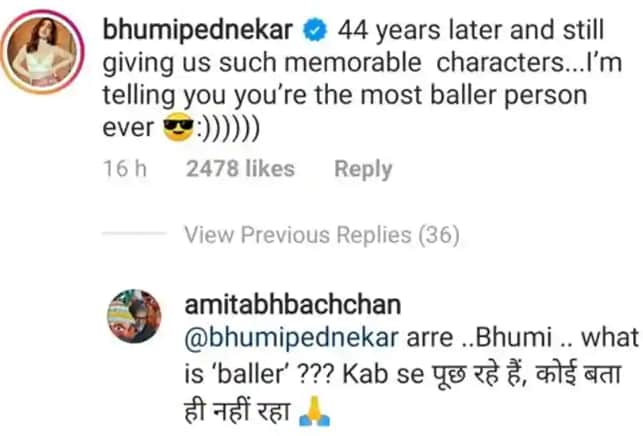 Earlier, Bhumi gushed over Amitabh’s gym selfie with his grandson Agastya Nanda, calling the 75-year-old actor a ‘baller’. His reply left the netizens in splits. “@bhumipednekar eh? What’s a baller... woh jo ball phenkta hai (the one who throws the ball)!!!”

View this post on Instagram
Fight .. fight the fit .. fit the fight .. reflective mirrors , laterally inverted imagery .. and the inspiration with Grandson .. A post shared by Amitabh Bachchan (@amitabhbachchan) on May 20, 2020 at 10:23pm PDT

On the work front, Amitabh has several films lined up ahead like 'Chehre' helmed by Rumi Jaffery, 'Jhund' directed by Nagraj Manjule and 'Brahmastra' by Ayan Mukerji.

Gulabo Sitabo is slated to release on Amazon Prime Video on June 12 and is the first big Bollywood film to opt for a digital release in the wake of the novel coronavirus crisis.