Anita Hassanandani and Rohit Reddy welcomed their first child earlier this year in February. The couple had tied the knot in 2013 after years of dating.

Television actress Anita Hassanandani Reddy updated her Instagram followers about a plush new car that they just bought on Tuesday evening. The actress and her husband Rohit Reddy were seen beaming with joy as they became owners of a black Mercedes Benz. The 40-year-old actress gave her 6.2 million Instagram followers a glimpse of her latest addition to garage through Instagram Stories.

In a series of videos, Anita showed her latest car. In one of the videos, Anita’s husband Rohit is seen cracking the coconut on the ground right in front of the car to welcome the new vehicle in a traditional way. Anita also shared a picture of her brand new car’s number plate which ended with 0902. Anita wrote in the caption of the picture that it is her son Aaravv Reddy’s birthday number and she was “most excited about this." 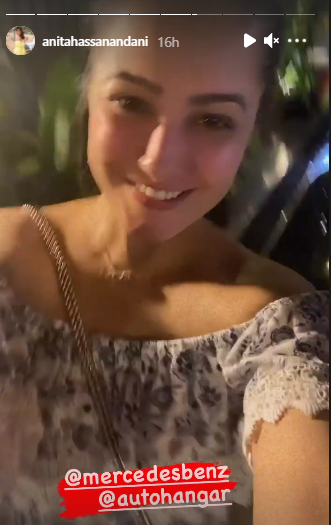 Anita and Rohit welcomed their first child earlier this year on February 9. The couple had tied the knot in 2013 after years of dating. Anita had shared the news of her child’s birth back in February with an adorable family frame, where the couple turned into doting parents smiling down at their newborn child. Anita had written in the caption, “And just like that we were three! Blessed with the best. Thank you, each one of you for your beautiful wishes.”

The actress continues to share some cute moments with her son and husband on her Instagram handle. In one of the Instagram posts from June, Anita had shared a family portrait where Aaravv was seen sitting on his father’s lap and Anita is standing behind the two of them. Praising her husband and son Anita mentioned in the caption, “My boys are so good looking I almost cropped myself. Lucky Me.”