Actress Kirron Kher is celebrating her birthday today. Wishes are in order for the ever-so-charming star.

Actress Kirron Kher is celebrating her birthday today. Wishes are in order for the ever-so-charming star. Social media platforms have been flooded with thousands of wishes from her fans and friends. One of the sweetest wishes came from Anil Kapoor who wished his ‘lovely friend’ with a post on Instagram. The actor shared two pictures, the first of which featured both himself and Kirron in a jovial mood. The candid moment shows both the actors dancing together on stage and enjoying to the fullest. The second photo shared by Anil apart from the throwback looked like a more recent click of the two. The duo is dressed casually and can be seen smiling for the camera.

Reacting to the post, Kirron’s husband and Anil’s close friend, Anupam Kher, wrote, “What a beautiful pic," and added a few emojis to the comment.

Anil Kapoor’s daughter, actress Sonam Kapoor also posted a wish for the veteran actress on her Instagram Stories. Kirron played on-screen mother of Sonam in the film Khoobsurat. Sonam posted a video that shows her sharing laughs with Kirron during a photoshoot. The two seemed to enjoy a great deal while posing for the camera. While Sonam asks the photographer to take a look at the captures, Kirron was busy giving him instructions. 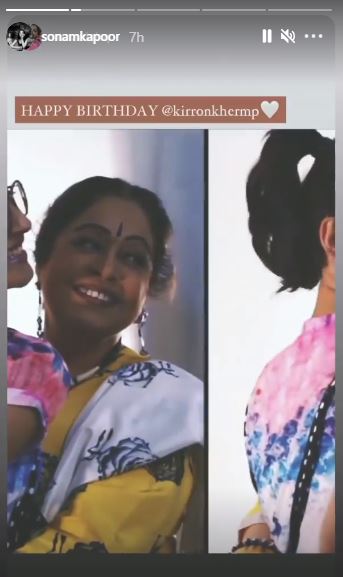 Anupam Kher penned the most heartfelt note to wish his wife.

Currently, Kirron is undergoing treatment for multiple myeloma, which is a type of blood cancer.

She made her acting debut with the 1983 Punjabi film Aasra Pyar Da. She has featured in many popular films such as Rang De Basanti, Main Hoon Na, Devdas, Om Shanti Om and has given memorable performances.