Anushka Sharma and Athiya Shetty are often seen cheering for their respective partners Virat Kohli and KL Rahul from the stands in IPL.

Royal Challengers Bangalore on Wednesday defeated Lucknow Super Giants by 14 runs in the IPL 2022 Eliminator at the Eden Gardens in Kolkata. RCB will now take on Rajasthan Royals for a place in the final and Anushka Sharma is all heart for husband Virat Kohli’s team. Anushka Sharma, who dazzled in a sizzling black outfit at Karan Johar’s party last night, shared an Instagram post by Royal Challengers Bangalore that mentioned the match result. The caption on the post read, “We move forward together, one step at a time. Next stop: Ahmedabad.” She reshared it on her Instagram Story with a series of red heart emojis.

On the other hand, KL Rahul’s girlfriend Athiya Shetty shared Lucknow Super Giants’ Instagram post with a white heart emoji. Chasing a target of 208, LSG were restricted to 193 for six in 20 overs. 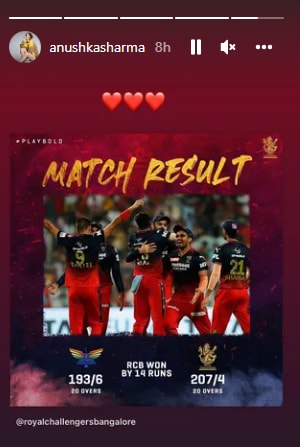 This entire IPL season, Anushka left no stone unturned to support her cricketer-husband and his team, Royal Challengers Bangalore. Earlier, Anushka Sharma gave a shout-out to RCB on her social media handle when it entered the playoffs. She shared RCB’s post announcing their entry on her Instagram story section and wrote, “To the playoffs… RCB. RCB. RCB.”

On the work front, Anushka Sharma is gearing up for the release of her upcoming film Chakda Xpress, which is based on the life of the Indian cricketer, Jhulan Goswami. This film will mark her comeback after her 2018 film Zero and also after the birth of her daughter Vamika. In a recent interview, the actress said that she is taking help from her cricketer husband Virat Kohli for her film. She added that since Virat is not a bowler, she turns to her bowling coach for help. Anushka also revealed that she records her training videos and shares them with Virat to get his opinion.