Bollywood actress Anushka Sharma who was accompanying her husband, cricketer Virat Kohli for his overseas matches, is back in Mumbai with daughter Vamika after they left in June. From her latest social media posts, it seems that the actress is not wasting a single minute after her long vacation and is looking forward to resuming her work as soon as possible. On her Instagram Stories section, she shared a post-workout selfie. She can be seen dressed in a neon t-shirt and has kept her hair tied in a bun.

She shared a gif with the picture that read, “sweaty selfie’. The actress also shared a beautiful sea view of the city. 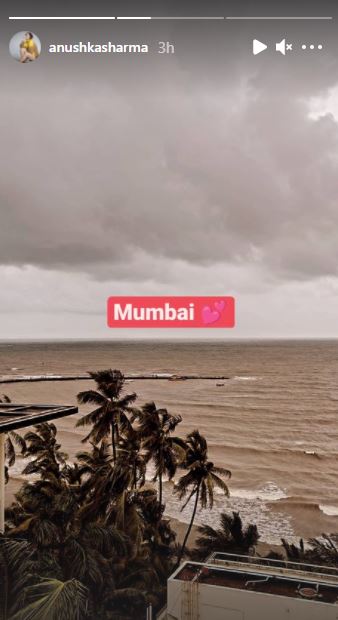 A couple of days back, she had reacted after Virat Kohli announced his decision to step down as India’s T20 captain after the T20 World Cup in UAE. The actress took to her Instagram Stories to share Virat Kohli’s statement, which he posted on his own account. Anushka also shared a red heart emoji along with Virat’s announcement to quit Team India’s T20 captaincy. Anushka was earlier stationed in the United Kingdom with Virat and their daughter Vamika. Virat was in the UK for the World Test Championship (WTC) final, followed by a five-match Test series against England. Anushka Sharma shared several gorgeous photos on Instagram as she made the most of her time in England with Virat and their daughter Vamika.

Read: Anushka Sharma And Her Many Moods Are A Sight You Can’t Miss; These Photos Are Proof