In the photo, Ranbir Kapoor can be seen kissing Luv Ranjan on his cheeks, while Arjun Kapoor photobombs their picture and flaunts a big smile.

Bollywood handsome hunk Arjun Kapoor has proved time and again that no one can beat his humour when it comes to commenting on his industry friends’ posts or writing captions for their birthdays. On director Luv Ranjan’s birthday, he uploaded a photo with him and penned a hilarious note. In the photo, Ranbir Kapoor, who is working on a yet-untitled film with him can be seen kissing the director on his cheeks. Meanwhile, Arjun photobombs their picture and flaunts a big smile.

Take a look at the photo: 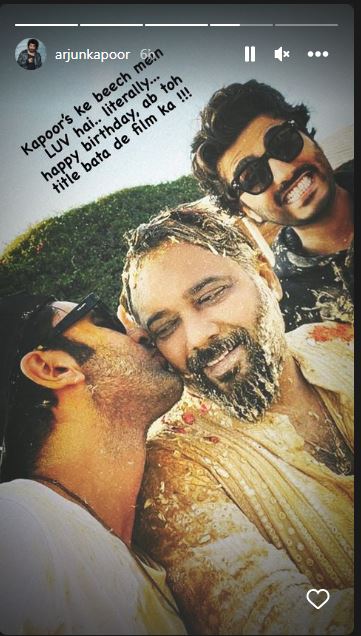 Luv Ranjan’s next film will see Ranbir and Shraddha Kapoor on-screen for the first time. It will also feature Boney Kapoor and Dimple Kapadia. They have already started the shooting. A couple of months back, some photos were leaked of Ranbir and Shraddha from the sets of the film.

Talking of Arjun Kapoor, he recently shared a post with Ranbir on his 40th birthday, and the caption once again left his fans laughing. He shared a photo where the Brahmastra actor can be seen sitting on his lap and smiling adorably. Sharing it, Arjun wrote, “Tujhe aise 40 saal se godh mein paal ke bada kiya hai maine aur aaj tu agni ban gaya…Proud of u my boy."

The actor was last seen in the film Ek Villain Returns which was a sequel to Shraddha Kapoor and Sidharth Malhotra’s film Ek Villain. The second part starred John Abraham, Disha Patani and Tara Sutaria. Next, Arjun Kapoor will be seen in Kuttey, The Lady Killer and Meri Patni Ka Remake.