Malaika Arora posted several pics of U2 front-man Bono on her social media handle only to be trolled by boyfriend Arjun Kapoor. Read below in detail.

Malaika had earlier expressed her excitement over seeing the band perform in India for the first time and she took sister Amrita along with her to the concert. The sisters posed for pics from the night and Malaika even met Oasis front-man Noel Gallagher. She had perhaps the best seats in the house and to demonstrate it to her fans, she posted pics of Bono performing on-stage. The pics appeared to be taken after zooming in on the singer and look like clicked by someone standing very near to him.

Sharing the pics on her Instagram handle, Malaika wrote, "Thank u for the music @u2. Doesn’t get better n closer than this (sic)."

Responding to the pics, Arjun asked, "Were u on stage with them?"

Check out their social media banter below: 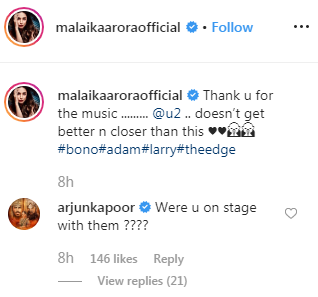