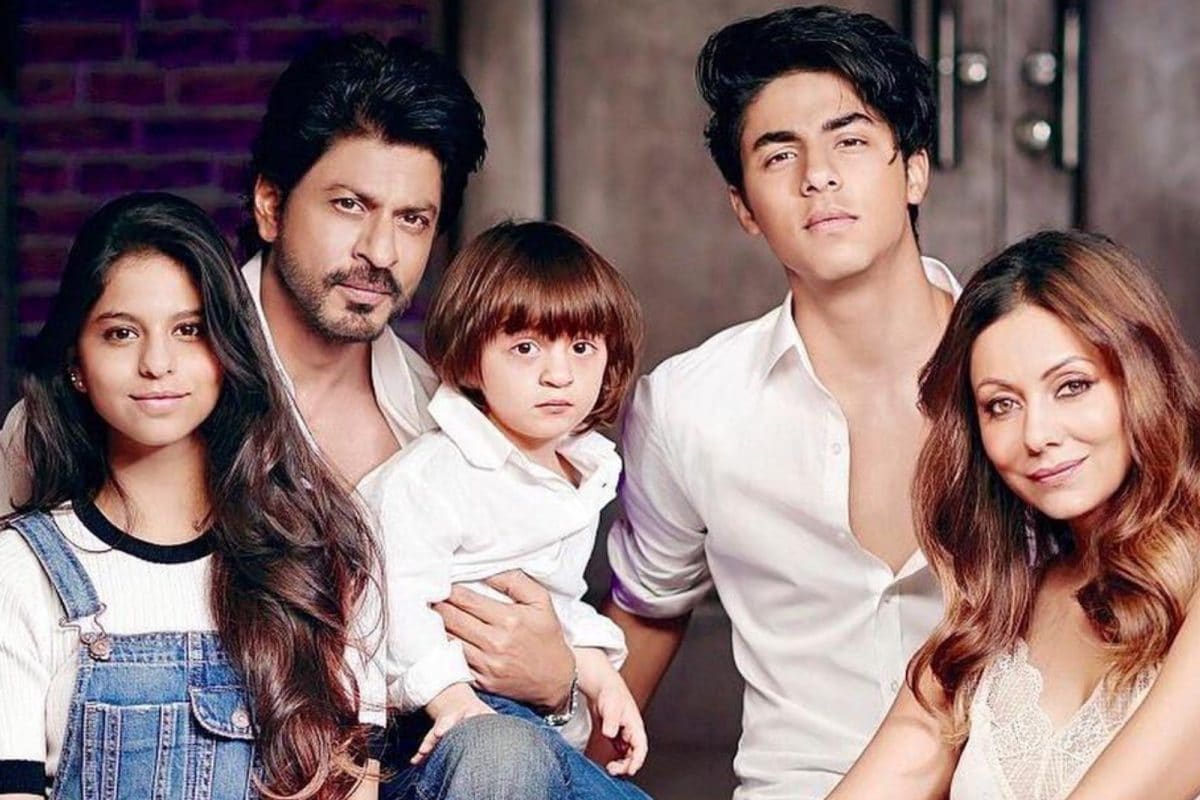 Sussanne Khan came out in defence of Gauri and Shah Rukh Khan earlier this week in a comment on a columnist’s post. “I think this is not about Aryan Khan, as he was unfortunately at the wrong place at the wrong time. This situation is being made an example to drive home the excitement that some people get as they have a witch hunt on people from Bollywood,” Sussanne Khan wrote.

Shah Rukh Khan’s ‘Josh’ co-star Puneet Vashisht has hit out at the Khans amid Aryan Khan’s arrest. “You see I was in Josh, Kya Kehna all the movies right? I didn’t get involved in all this which is why the ‘Khan-paan’ boycotted me for 27 years. Now God has boycotted all of them,” Puneet was quoted as saying by ETimes.

Ahead of Shah Rukh Khan’s son, Aryan Khan’s bail hearing, some fans were spotted outside SRK’s sea-facing bungalow Mannat in Bandra. Ever since Aryan’s arrest on October 3, fans have been regularly gathering outside Mannat to show their solidarity with Shah Rukh. Bollywood superstar Salman Khan, along with his father Salim Khan, paid a visit to Shah Rukh Khan at his residence Mannat in Bandra on Tuesday evening. This was Salman’s second visit to Mannat after Aryan Khan’s arrest. KRK is all praise for viral poem supporting Shah Rukh

Akhil Katyal’s poem on Shah Rukh Khan went viral as Kamaal R Khan expressed his solidarity with the actor. Referring to the characters Shah Rukh has played over the years, Akhil shared that the actor has the whole of India in him. As soon as he posted the poem on social media, it went viral and received immense support and love. KRK also shared the poem on his Twitter account and wrote, “It’s true! Love you Bhai Jaan! @iamsrk.”

Self-proclaimed film critic and actor Kamaal R Khan has claimed in a tweet that many star kids are planning to leave India in the wake of Aryan Khan’s arrest in the Mumbai drug bust case.

When Shah Rukh Khan got candid about his kids

Shah Rukh Khan and Gauri were childhood sweethearts and the two had tied the knot on October 25, 1991. The couple is parents to three children – Aryan Khan, Suhana Khan and AbRam. From calling his kids his “greatest friends” to opening up about their aspirations, here’s a look back at some of SRK’s adorable statements on his kids:

“Aryan wants to be bigger than me…”

“When my daughter likes somebody, I’ll just accept it…”

These moments are makers of your tomorrow: Hrithik Roshan in his open letter to Aryan

Last week, Bollywood star Hrithik Roshan had shared a photo of Aaryan Khan on Instagram and penned a long note advising him to keep his calm. “My dear Aryan, Life is a strange ride,” Hrithik wrote. Take a look at the full letter here:

Shah Rukh Khan’s fans and friends from Bollywood have come out in support of the actor as his son Aryan Khan got embroiled in a drugs case. Earlier, photos had surfaced on social media showing placards with messages for the actor left outside his residence. Read the full story here.

Aryan Khan and seven others were detained, and subsequently, arrested after the Narcotics Control Bureau raided a cruise ship off the Mumbai coast in the wee hours of October 3. On October 7, the metropolitan magistrate had sent eight accused including Shah Rukh Khan’s son in 14-day judicial custody after their NCB remand ended. The court rejected his bail plea on October 8, stating that it was not maintainable before it. The plea was not decided on the merits and facts of the case. The next hearing for bail plea will take place today, October 13.

Shah Rukh Khan’s son Aryan Khan’s bail application was rejected by a magistrate court on October 7. Aryan and other accused have been arrested after the Narcotics Control Bureau raided a cruise ship off the Mumbai coast in the wee hours of October 3. According to the court order obtained by CNN-News18, the additional Chief Metropolitan Magistrate (ACMM) R M Nerlikar listed the offences as triable by the Special court only as one of the reasons due to which Aryan’s bail application was rejected. Read more details here.

Raju Rahikwar, who is also known as Junior Shah Rukh Khan, spoke at length about how SRK’s son Aryan Khan’s drug controversy has affected his work. “I was supposed to be a part of a birthday party on October 10 in Jaipur. A week later I had to attend a social gathering in the same city. But both the events have been cancelled. The organisers told me, ‘people aren’t comfortable with SRK’s current image.'” Read his full interview here.

Shah Rukh Khan and Gauri are going through a tough time with their son Aryan Khan being lodged in Arthur Road jail in the Mumbai drug bust case. Shah Rukh and Gauri are reportedly spending sleepless nights with the constant follow-up in the case and have been constantly checking on Aryan’s health too, according to a report in India Today.

Actress Kangana Ranaut took an indirect dig at Shah Rukh Khan for not apologising after his son Aryan Khan was arrested. She shared a comment by Jackie Chan who had refused to protect his son after the latter was arrested in a drug bust. As of now, Aryan Khan has been lodged in Arthur Road Jail after a Mumbai court rejected his plea on Friday on the premise of maintainability. He was arrested and detained by the Narcotics Control Bureau during a raid conducted on a cruise ship on October 3.

Gauri Khan turned a year older on October 8. Suhana Khan had wished her mother on her special day with a throwback picture of her and dad Shah Rukh Khan. “Happy birthday Ma,” Suhana wrote and added a heart emoji. Her post came at a difficult time for the family, after her elder brother, Aryan Khan, was arrested by the Narcotics Control Bureau on October 3 in a drugs case. Read the full story here.

Prashant Walde, who steps in for Shah Rukh Khan to shoot his action scenes, has confirmed that the shoot for Atlee is going as planned amidst Aryan Khan’s arrest. He told Hindustan Times, “The shooting of the film with Atlee is going as per plan, and other advertisements work as well. I’ve been shooting these projects for the last 20 days, and that hasn’t changed after recent developments.”

Apparently Aryan’s mother Gauri is becoming “progressively anxious,” according to a media report.

Meanwhile, Bollywood superstar Salman Khan, along with his father Salim Khan, paid a visit to SRK at his residence Mannat in Bandra on Tuesday evening. This was Salman’s second visit to Mannat. He was earlier clicked arriving at SRK’s residence on October 3, hours after Aryan was arrested by the Narcotics Control Bureau (NCB) in connection with a drug raid on a cruise ship. Aryan was denied bail by a magistrate’s court on October 8 in the drugs case.

Shah Rukh’s fans and colleagues from the film industry have also extended their unflinching support to the Bollywood superstar and his son. Bollywood personalities like Hrithik Roshan, Alia Bhatt, Sanjay Gupta, Ali Fazal, Shekhar Suman, Vishal Dadlani, Pooja Bhatt and Hansal Mehta among others showed solidarity with SRK. Veteran actor-politician Raj Babbar took to Twitter on Sunday to extend his support to Shah Rukh. “He came, faced and achieved a conquest unparalleled. I have known (Shah Rukh Khan) for long to know hardships won’t deter his soul. As the world teaches his young boy through wounds, I am sure the fighter’s son will definitely fight back. Blessings to the young man,” the 69-year-old wrote.

Bollywood filmmaker Karan Johar visited Shah Rukh at Mannat on Friday evening, minutes after Aryan was denied bail by the magistrate’s court. Karan has been a close friend to Shah Rukh and his wife Gauri Khan for several years. It was recently reported that he immediately headed back to Mumbai after he got the news of Aryan’s arrest. Karan was apparently on a getaway abroad.