Aryan Khan Bail Hearing LIVE Updates: The son of Shah Rukh Khan and Gauri Khan got no relief from special court on Thursday either and his bail plea will now come up for hearing on October 20.

Aryan Khan Bail Hearing LIVE Updates: The hearing on the bail application of Shah Rukh Khan’s son, Aryan Khan, in connection with the Mumbai drug bust case resumed in the sessions court on Thursday noon. As the day drew to an end, the judge reserved order on the bail of Aryan and other accused in the matter, saying it is busy with other matters and will now hear the pleas on October 20. Shah Rukh’s manager Pooja Dadlani and bodyguard Ravi Singh were present in the court premises. It is being reported that 23-year-old Aryan is having a tough time adapting to the conditions of Arthur Road Jail, where he is Read More

According to a report in Times of India, Aryan Khan spoke to parents Shah Rukh and Gauri Khan on a video call for ten minutes. A senior jail official has confirmed the reports. Prisoners under trial can talk to their family and lawyers thrice a month.

According to a report in India Today, Shah Rukh Khan’s son Aryan is qaidi no 956 at Mumbai Central Prison AKA Arthur Road Jail. The report further revealed that he is tense and uncomfortable in jail.

Amid Aryan Khan’s arrest by NCB, Shah Rukh Khan is yet to resume the shoot for Atlee’s next. His co-star Nayanthara started shooting on Thursday. Shah Rukh’s body-double has also been shooting for the film.

How Gauri Khan is dealing with Aryan's detainment

Gauri Khan has kept ‘mannat’ for her son Aryan Khan’s return home and is keeping off sugar and sweets during Navratri, a close friend has revealed.

Shah Rukh Khan‘s son Aryan and five others who were arrested in the Mumbai drug seizure case have been shifted to the general barracks of the Arthur Road jail after their quarantine period ended. Aryan (23), arrested by the Narcotics Control Bureau (NCB) on October 3 from a cruise ship off the Mumbai coast, will have to remain in jail for at least six more days, as a special court earlier in the day reserved its order on their bail pleas till October 20.

Why order on Aryan Khan's bail plea was delayed by six days?

The lawyers on both sides of the argument have submitted multiple judgment copies to the court, which the judge will have to study before giving an order. Therefore the judge will need time to study all documents and pass the final order on the bail plea and hence Aryan’s bail plea will take more time to be decided on.

Filmmaker Hansal Mehta in a tweet said the consumption of marijuana/cannabis may be legal in many countries, but in India leads to “harassment”.

Marijuana/cannabis consumption is legal in many countries. It has been decriminalised in many. In our country its consumption is used more for harassment than for narcotics control. A movement like the one to abolish sec 377 is necessary to end this continuing travesty.

After hearing heated arguments by the prosecution for the Narcotics Control Bureau (NCB) and the defence lawyers, Special Judge VV Patil kept his verdict on the bail pleas of Aryan Khan, Merchant and Dhamecha, who are among 20 nabbed so far in the sensational rave party raid of October 2, in abeyance for the next five days.

It is reported that during the auspicious occasion of Navratri, Gauri Khan has been keeping off sweets and sugar and is constantly praying for her son Aryan’s return home.

Report has claimed that Gauri Khan has kept a mannat for Aryan’s release and has constantly been praying during Navratri while being off sugar and sweets.

irector Rahul Dholakia and actor Swara Bhasker were some of the film personalities to express their disappointment after a special NDPS court here said it would pronounce its orders on bail applications filed by Aryan Khan, son of Bollywood actor Shah Rukh Khan, and two others on October 20 in a case of alleged seizure of drugs from a cruise ship off Mumbai. Aryan Khan, 23, was arrested on October 3 with seven others when the Narcotics Control Bureau (NCB) busted a drugs party on board a cruise ship. He is currently in Arthur Road prison.

Visuals of Preity Zinta at Mannat Preity Zinta was seen arriving at Mannat in Bandra, Mumbai after Aryan Khan’s bail was deferred for hearing on Oct 20. Preity is a close friend of Shah Rukh and Gauri’s. 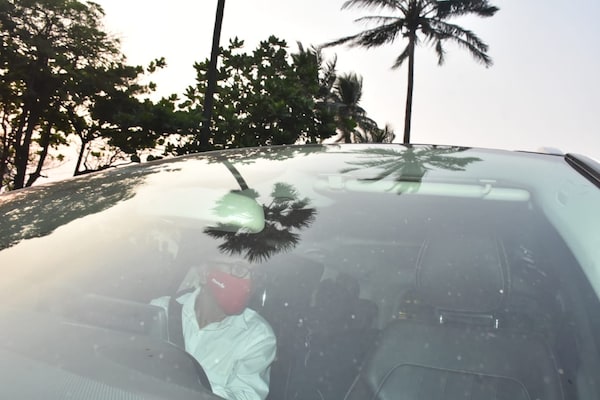 After court granted no relief to Aryan Khan today and deferred his bail hearing till October 20, worries seem to be mounting for Shah Rukh Khan and Gauri Khan. Both parents have been unable to meet their 23-year-old son since October 2 when he was first taken into NCB custody.

Actress Preity Zinta, who has been a co-star of Shah Rukh Khan in many films, arrived at Mannat on Thursday evening after Aryan Khan’s bail hearing was deferred till Oct 20 by a special NDPS court. Aryan will have to spend at least five more days in Arthur Road Central Jail.

NCB, in its argument against granting bail to Aryan Khan and other accused, has presented WhatsApp chats as evidence showing that Aryan Khan was an active link of the illegal drugs chain along with the other accused.

Munmun Dhamecha, one of the co-accused in drug bust case, is a model

Munmun Dhamecha, who has been held by the NCB in a matter pertaining to drug bust on a cruise ship, is a model by profession. Her bail in the matter will be coming up for hearing on Oct 20.

A special NDPS court in Mumbai would pronounce its orders on bail applications filed by Aryan Khan, son of Bollywood actor Shah Rukh Khan, and two others on October 20 in a case of alleged seizure of drugs from a cruise ship off Mumbai. After hearing extensive arguments of the investigating agency NCB and defense lawyers on Thursday, special judge V V Patil posted the matter for orders on October 20. Earlier, a magistrate’s court had rejected the bail pleas of Aryan Khan, Munmun Dhamecha and Arbaaz Merchant. The three were among those arrested from the Goa-bound cruise ship on October 3. .

Shah Rukh Khan and Gauri Khan’s son Aryan Khan was detained on October 2 along with seven others after the NCB raided an alleged rave party on a cruise ship. A Mumbai court on Friday rejected Aryan’s bail plea after which he was sent to Arthur Road Central Jail where he will remain till Oct 20.

Earlier on Wednesday, Salman Khan paid another visit to close friend Shah Rukh at Mannat. This was the third time that Salman visited Shah Rukh and showed his unwavering support to the family. Aryan was denied bail by a magistrate’s court on October 8 in the Mumbai drug bust case on a cruise ship. He was among eight persons who were detained on October 2. It is learned that Shah Rukh and his wife Gauri Khan are “devastated” by the news of Aryan’s arrest and have been spending “sleepless nights” worrying about their son, who is currently lodged in Arthur Road Jail. Gauri is said to keeping off sweets and sugar and has also kept a ‘mannat’ during Navratri for Aryan’s return.

Rahul Dholakia and actor Swara Bhasker were some of the film personalities who took to social media to express their disappointment after the special NDPS court in Mumbai said it would pronounce its orders on bail application Aryan later on October 20. Shah Rukh and Gauri Khan have stayed away from the media glare and avoided stepping out of their Bandra home, Mannat, since the time their son Aryan was apprehended in the drug seizure case by the Narcotics Control Bureau (NCB).