ASEAN-India Music Festival 2017: When Delhi Became One With Music At The Iconic Purana Qila

The three-day festival witnessed performances by the likes of Papon Live, The Raghu Dixit Project, Bipul Chettri and The Travelling Band, Avial and Shankar Ehsaan Loy from India and bands like The Ugly Band (Myanmar), Nam Fon Indee (Lap PDR), The Ransom Collective (Philippines), Tim De Cotta (Singapore) and Asia7 (Thailand) among others.

Delhi's iconic Purana Qila glittered in gold as the first edition of ASEAN-India Music Festival 2017 kick started in the capital on Friday and concluded on Sunday with Shankar Ehsaan Loy's power packed performance.

With bands from countries like Myanmar, Malaysia, Singapore, Cambodia, Viet Nam, Indonesia, Lao PDR, Brunei Darussalam, Thailand, Philippines participating in the festival besides India. The festival organised by Ministry of External Affairs, GOI in collaboration with Seher, turned out to be an eloquent affair of cross cultural exchange. While the audience members probably didn't understand most languages, the bands' rhythm and music managed to transcend all barriers and bonded with people as they grooved together to varied tunes.

"Delhi is the host city for celebrations of the 25th year of ASEAN India Dialogue Relations and also the host for Government summit which is to be held in January. We're creating a buzz so that when India hosts a summit, people know what ASEAN truly is. This is the first taste of ASEAN for the people," explained Sanjeev Bhargava, Founder Director, Seher India when asked why Delhi was the chosen city. 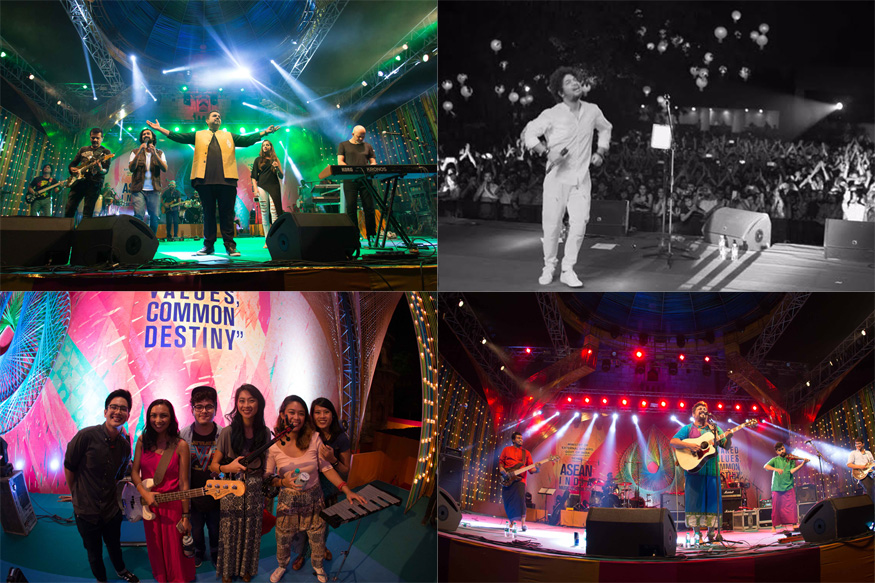 Speaking to News18.com on the sidelines of the festival, he shared how important it is to encourage and present the local talent in the right manner.

"Bands like Avial- they're only heard in Thiruvananthapuram and that area, so we gave them an opportunity over here to play. There's 'adaan-padaan' between Delhi and other states. Similarly, Bipul Chettri rarely performs in Delhi to such a massive crowd. In fact, 10 years ago, we gave Raghu Dixit to Delhi and look where it has reached today. We also showcased Papon in Delhi. We aren't the only one, they've the talent but somebody has to present the talent well."

Considering that people of all age groups and from all walks of life turned up in large numbers, it was a moment of pride for the organisers and the bands. "We're happy that all the bands are good. And these people are really friendly and talented. Interspersed with some Indian bands, we're getting a wonderful response," he said.

The three-day festival witnessed performances by the likes of Papon Live, The Raghu Dixit Project, Bipul Chettri and The Travelling Band, Avial and Shankar Ehsaan Loy from India and bands like The Ugly Band (Myanmar), Nam Fon Indee (Lap PDR), The Ransom Collective (Philippines), Tim De Cotta (Singapore) and Asia7 (Thailand) among others.

Not just a variety of bands but also an array of music genres were served to the people present- from punk through jazz to rock to traditional.

Thailand's Asia 7, which last performed in South Korea, felt that the vibe is very different in the two countries but the audience in both have been lovely. "The audience here has been very supportive and so cheerful. We are having a great time here and we are making new friends and new fans for our band. So it's amazing," they said.

The band, which brought to fore a mix of Thai traditional and jazz music, couldn't get enough of the crowd as they sang and cheered for them throughout the performance.

The Ransom Collective, a jovial band from Philippines expressed elation over being in India. "It's our first gig out of the country and it's hard to believe we are here. It is so surreal."

On being asked about the kind of music one is offered back in their home, they explained, "It's very diverse- you can hear people with western influences, with indigenous influences with our own kind of music. You'll also find different kinds of music like jazz and rock blues. Everyone is very accepting of what we produce."

"Indian music is very festive. It seems like you can get bunch of people to dance to it- it so colourful and vibrant," added the band's frontman.

A band member from Lao PDR's Nam Fon Indee confessed that they didn't expect the crowd to go crazy for them.

"The audience was wonderful. Even though they can't understand the language, they understood the music and enjoyed it. We are one with music."

Sharing that they are big fans of Bollywood music, they said, "We try to perform Indian songs but we can't- because of the language and the instruments - it's very hard."

It wasn't just international bands who couldn't stop praising the crowd but also the Indian artists who went on to exclaim 'Dilli' to be their favourite performing place. Whether it was crooning Papon's 'Na Aaye Ho' or learning Raghu Dixit's 'Lokada Kalaji' or engaging in a jugalbandi with Shankar Ehsaan Loy- the crowd bestowed upon it all and made this festival worthwhile.