There's a total of 18 songs on US President Donald Trump's lunch playlist, which is a mix of bhajans, ghazals, western classics and Hindi film songs.

Rolling Stone's Start Me Up, Elton John's Candle in the Wind and Beatles' Hey Jude will be among the iconic songs that will keep US President Donald Trump entertained during the lunch hosted for him by Prime Minister Narendra Modi. The US President, alongwith the first lady Melania Trump and daughter Ivanka, are on a two-day trip to India.

There will be a sarangi and santoor jugalbandi at the lunch hosted by PM Modi. Artistes Gouri Banerjee (sarangi), Shruti Adhikari (santoor) and Priya Tiwari (tabla) will be performing. Their playlist starts with the bhajan Vaishnav Jan To and ends with Kishore Kumar's Chhukar Mere Mann Ko from the film Yaarana.

There's a total of 18 songs on the playlist, which is a mix of bhajans, ghazals, western classics and Hindi film songs. There are elements of Indian classical music as well, as the artistes will be playing Raag Sudh Sarang, Khamaj - thumri and Raag Madhuvanti. The patriotic Mile Sur Mera Tumhara also features prominently on the playlist. 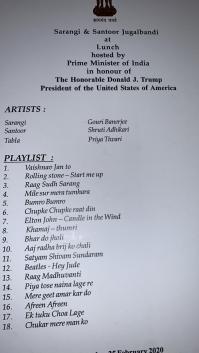 The lunch also has an elaborate menu, with Indian dishes given an exotic twist to give the US President a taste of the best of Indian cuisine. The non-vegetarian menu has curried pineapple with mustard seed, hand pounded mutton, and pink salmon marinated in sweet basil chutney. 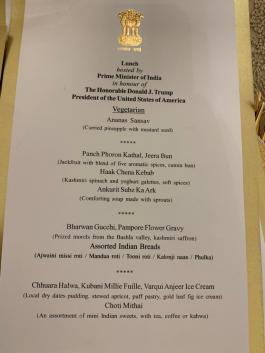